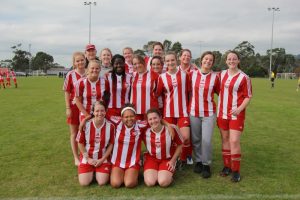 The Trafalgar Victory FC Senior Women’s team this week play off against Fortuna 60 in the LVSL Browne/ Huizer Cup. Details are as follows:

This is the first LVSL Senior Cup our club has ever played a final in.  It’s a big deal for the team and for the club.  So TVFC need all its members and friends to come along and cheer for our girls.

Come on. Support your club!