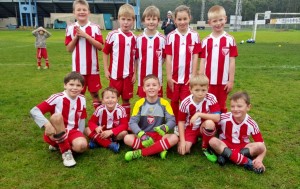 This week, the Trafalgar Under 8s played at Monash. One team played Monash and the other team played Newb/Yallourn. Team one was applauded for their continuously great effort during round 9. Each team player saw some great enthusiasm with their offence skills, making every attempt to manoeuvre the ball into the opponents end and striving for a goal. The teams defence skills has improved immensely from their training sessions as well as their ability to be able to see an open space.  Team work has been a valuable skill also, to be able to back up another player and to be able to pass to a player when they’re in open space. It’s also great to see each player having a go at being a goalie, as this can sometimes be a nervous position.  Just a thankful reminder to the parents who help out with rotating players on and off the field as this allow for the coaches to focus on the game and the players. Well done this week to Matilda for her continuous and persistent effort of having a go.eam 2 played Newb/Yallourn. Traf showed great sportsmanship against a young group of players still learning. The players shared the ball around, held position and have been focusing on the offensive and defensive positions. The goalies often sat down in the mud but were eager to get back out on the pitch to run around. All players are showing great enjoyment for the game still which is great to see. Well done James for getting the award this week.