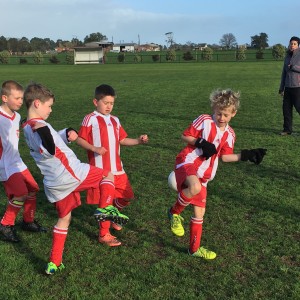 The Trafalgra Under 8s are still going strong with only a few weeks left the players enthusiasm for the game of soccer better than ever. Players from Trafalgar are energetic and excited every Saturday which makes it enjoyable to coach and referee on the day. Team 1 played Moe. The game was evenly matched. Players from Trafalgar know there positions well and got a few fast goals. There was many that came close as we continued the game. Well done Justyce and James for great goalie skills stopping Moe from scoring goals. Well done Bailey for your game you played running the whole pitch and award. Team 2 played Monash. Another great match. The players on this team again show a love for the game and understand the skills and rules of the game. Their passing around the pitch showed good team work and foot work. The dedication to training from under 8 at training has helped build players soccer skills. Well done Baxter who received his award for his continued efforts, improvement and enthusiasm in goalie position.