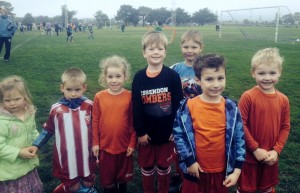 Two of our Traf teams has big wins in Under 6 soccer this week. An 8-0 victory and a 10-1 victory had the little guys needing all their fingers to count their goals. No players awards this week as we all concentrated on being gentle victors, more concerned with how much fun we had than how many goals were scored.
Traf v Moe saw this team really step up a notch in the second half, trying to really spread across the small fields. Many great solo efforts were successful but we also had a couple of goals with three players involved. Big congratulations to Jake, Anton and Logan who together with Gracie showed real team work.
In Traf v Monash Oscar had a blinder of a game and scored too many goals to count on one hand. Tom and Onyx also did a team effort to score a joint goal – both boys first real team effort of the season.
Our third team also worked hard in their great game against Monash. Well done and thanks to all the parent helpers this week.