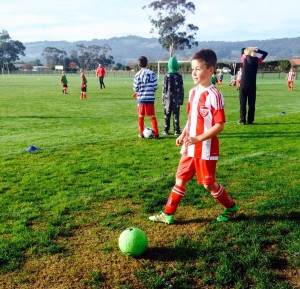 Under 6 goes from strength to strength with a number of the kids really getting the match idea this weekend. Great to host our friends at home in Traf where we all enjoyed playing where we train.

Two of our teams played against each other with Lachlan being so determined and taking the ball for a couple of good runs culminating in goals for Traf yellow. In the second half Tom came out strongly for Traf red and also did a few runs down the field. These two took home the awards this week but there could have been lots of awards. Oscar’s powerful kicks even proved too good for the small fields a couple of times. Quinn really concentrated on the game and Fenn also was right with it all game. Onyx kept up his developing form this week and Jack showed he can also keep up for a whole game.

Many of the team who had a bye last week had lost nothing with a week off.

They showed great team work with excellent passing, strong kicks and consistent effort and they were rewarded with lots of goals. Well done Zoe, Anton, Jake, Ethan and Logan.