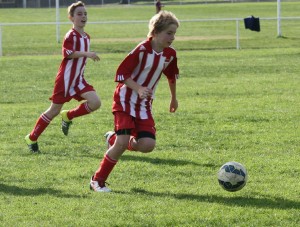 The Trafalgar Under 14 Boys team traveled to Moe’s Olympic Park for their round six encounter with neighbouring club, Moe.  In a bizarre fixture it was the second time in 4 weeks that the two teams faced off and having won the previous match, Trafalgar were keen to add to their already impressive start to the season.

Trafalgar fielded a very different line-up to the one that defeated Moe earlier in the year.  Goal keeper Luke Ibbotson, backman Connor Ibbotson and central striker Darcy Lewis were all unavailable for this week’s match.  Adding to the challenge was the late arrival of key defender Hardy Kenny, who had commitments with his inter league Aussie rules squad.

So with only nine players at his disposal, Coach Mark topped up his squad with three keen members of the TVFC Under 12 team in Izaak Porter, Harry Pace and Jackson Spencer.  Star Girls Under 13 player Haylea Porter was also more than happy to join the squad for the day.  However, all four additional players had to travel to Moe from their earlier matches in the morning.  Accordingly the team played 2 short for the first 15 minutes of the first half.

Whilst the Moe team are extremely young and not yet in the top bracket of teams in this age division, they are extremely enthusiastic, fast and very hard working. They are a very good opponent and are always threatening to score.

As the game unfolded it became evident that scoring on the undersized back pitch at Moe would not be easy.  With little room to move, it challenged even the best players to move the ball effectively.  The first 15 or so minutes were a real arm wrestle with neither team getting many scoring opportunities.  Both Jacob Holmes and Nic Tammes were creating opportunities along the wings and both boys displayed great skill and control for the entire match.  However, where the first goal was coming from was anyone’s guess.

Eventually it was Jacob who kicked the first goal of the match. After numerous runs into the box, Jacob somehow found sufficient space to produce a scoring opportunity.  This was all he needed as he calmly converted sending the Trafalgar camp into a frenzy.

With the deadlock broken the team, and coach, seemed to relax and find their rhythm.  The attacking third seemed more accessible and the Moe defensive unit were under the pump.  It was only a matter of minutes following the first goal that Trafalgar striker Aedan Rothmeier found the back of the net with his trusty left foot.  Aedan has been threatening to score for several weeks now, and it was only a matter of time before he delivered on the big stage. Great goal Aedan!

With the cavalry of additional players arriving to the ground the team went form two players short to a bench of three.  Under 12 player Jackson Spence wasted no time in making an impact upon the game. His speed and skill causing huge headaches for the Moe opposition.  In fact Jackson made several runs into the box threatening to score on numerous occasions.  Eventually he drew a foul and was awarded a penalty.  Following the team rule of “whoever earns the penalty has the right to kick it”, Jackson kicked a lovely penalty and was only denied a goal by a great save from the Moe goalkeeper.

Haylea Porter strengthened the TVFC backline considerably.  Her reading of the play and “first to the contest” approach to the games reminded all present of what an amazing talent she is.  Haylea along with Jackson Clerks held the Moe opponents at bay for the majority of the match.  Flynn George and Hardy Kenny worked extremely hard as defensive wingers to keep the fleet of foot Moe wingers under control.  To their credit Moe did manage to reduce the deficit by half time with a goal of their own. The half time score line being 2-1 in favour of the visiting Trafalgar Team.

The start of the second half once again tightened up.  Against the trend of play, Moe were able to kick their second goal mid-way in the half to tie the match up 2 goals a piece.  So for all their hard work and general domination of the match the Trafalgar team looked as if they were heading towards shared points.

The team continued to battle hard, never giving up, and always giving their best.  Harry Pace played a great game as another of the Under 12 recruits for the day.  He didn’t look out of place in his new role in the mid-field ad made a genuine contest for the entire match.  Izaak Porter, also form the Under 12 team played up front and had a couple of shooting chances himself.  It is worth mentioning that the boys form the Under 12 team had already played a game that morning and were backing up two matches with relatively no break in between – an amazing effort for their club.

With the game pushing late into the second half, the stage was set for one young man to step up and win the game for Trafalgar.  Who would it be?  Would it be the ever reliable goal scoring midfield?  Would Hardy Kenny make a run from defence?  Would the brilliant goal keeper, Drew O’Brien (who incidentally had a blinding game in goals), make a glory solo run from is goals?  No.  Come the hour, come the man!  Jack (1 goal a game) O’Connor!    Yes it was Jack scoring again!  Supporter of this talented team are becoming used to Jack slotting a goal most matches.  Gone are the days of 2015 where poor Jack couldn’t buy a goal.  In 2016 he makes it look easy.  With only minutes to go, Traf was up 3-2.

Finally in the closing minutes of the match a free kick was awarded to Trafalgar some 30 meter from goal. Mid fielder Michael Judd turned to the coaching box, looked for permission from the coach to have a ping, went back and slammed the ball into the back of the net. A deserving win to the team who were in all modesty the better team on the day.  The final score line was Trafalgar 4, Moe 2.

The team has now played 6 rounds.  The results of which have been 4 wins, 1 draw and 1 bye.  A scintillating start to the season for the team.

The highlight of the day for myself as team coach was the willingness for the three Under 12 boys and Haylea Porter to come and offer assistance when it was needed. This reflects very well on their own team’s culture and on the club as a whole.  It is hoped that some of our younger aged boys could return the favour in the event that a similar situation presents itself to the Under 12 team.

This week’s BK team awards were given to Haylea Porter for an outstanding game and to the three Under 12 Boys for helping us out: Jackson Spencer, Harry Pace and Izaac Porter. 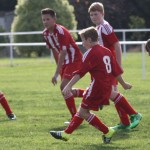 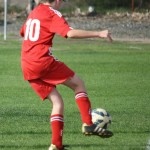 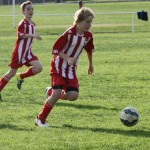 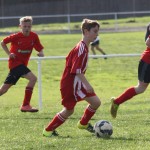 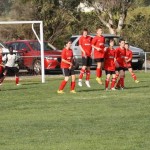 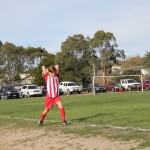 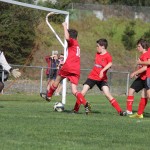 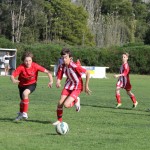