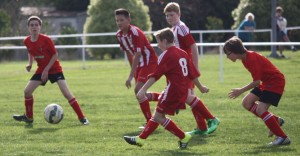 Trafalgar Victory played Newborough-Yallourn at Burrage Reserve for their round 9 LVSL Under 14 match.  A lot was expected from the Trafalgar team having lost the past two matches.  With all teams coming off a break following the Queen’s birthday long weekend, players from both sides were raring to go.

From the first kick off of the match it was clear that Trafalgar weren’t switched on at all.  There were wild “airy” kicks, first touches to the opposition’s advantage and in some cases no first touches at all.  With the exception of the defensive unit, which was ably lead by the Ibbotson twins, there was little to no communication between the three lines of players on the pitch.  Passes were missing their mark and service to team mates was very poor.

Every player on the Trafalgar team were giving 100%. However, many look lost in their positions and very few were playing smart football.  It was only a lovely late first half goal from midfielder Nic Tammes that salvaged something from the first 35 minutes of play.

Coach Mark stated to the team that it was the worst half of team football he had ever watched.  Not the most inspirational half time address, but necessarily confronting.  He identified Luke and Connor Ibbotson, Nic Tammes and Drew O’Brien as the only TVFC players to have won their positions on the field.  Whilst he acknowledged that each player was trying their best, he asked of them to play smarter and to provide better service to their team mates.

Like a good team does, the Trafalgar lads responded well.  The ball movement was up and Jacob Holmes and an injured Michael Judd joined Nic Tammes in the midfield via some good carry and passing to advantage.  The inclusion of speedster Hardy Kenny was a welcomed addition to the team in the second half of the match.  He chased, tackled and generated considerable forward momentum for his team.

Drew O’Brien played his best match every for Trafalgar.  His work on the right defensive wing was superb.  He too applied pressure to his opponent all game long, intercepted numerous passes and ran the ball out of the back line time and time again.  Likewise, Nic Tammes had the ball on a string and was simply unstoppable.  He made the game look simple via great first touch and superb ball controll.  Nic clocked up many kilometers in the middle of the park and was a standout for his team on the day.

With good team play Trafalgar took the ascendancy of the match.  A beautiful solo run by Jacob Holmes followed up by a delightful cut back pass to striker Darcy Lewis, eventuated in a glorious one touch finish in the top right of the net.  Easily the play of the day.

Trafalgar’s third and final goal came from an excellent chain of passes that set Michael Judd free in the box one on one with the goalkeeper. Michael was seriously off balance when he struck the ball and generated very little power on the shot.  Unfortunately, for Newborough-Yallourn, the shot slipped straight through the hands of their goal keeper to result in a final score line of 3-0, in Trafalgar’s favour.

A good win in the end that should raise the Trafalgar  team to fifth place on the ladder with 5 wins, 2 losses and 1 draw.

The BK’s team player of the day was this week awarded to two players:  Nic Tammes and Drew O’Brien.