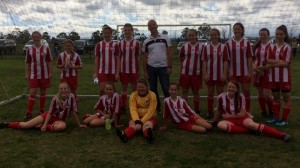 Under 13 Girls. Round 2: Trafalgar V Falcons

What a fabulous start to the game. For 28 minutes we witnessed a very even 0-0 contest. There were a couple of close chances for each team. With two minutes to go Falcon scored 2 quick goals to head into half time. After the half time break the girls continued to fight hard with Falcons capitalising on their chances. Trafalgar played very well as a team with awards given to Tia, Paris and Chloe (keeper).Final score was 0-5