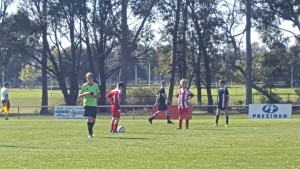 Under 12 had an away game at Newb/Yallourn. Coming into this match with 1 sub and the sun beaming down it was going to be a tough game. The young team a learning to hold their positions and work on set game play. We are building a strong defensive line and Alan has been assisting the players at training fine tune their skills. Jackson started the team off strong scoring 3 goals in the first half. With injury in the second half as Cooper took a tumble followed by a second injury left the team short but they persisted to win 6-2 Trafalgar Victory’s way.