The Trafalgar Victory senior teams celebrated the end of the 2016 season with its annual presentation night. Once again, the occasion with held on the 22nd of October at the Black Tie in Warragul. A special thanks must be extended to Emma Hudson and Lachie Wyatt for organising the event.

Throughout the night, a number of awards where announced, those being:

The night also honoured former TVFC President Wayne Jones, who passed away earlier this year. Instrumental in setting the foundations of the club, Wayne volunteered as a committee member and junior coach. Wayne was always keen to watch his boys playing for TVFC, he was a great presence and social member. To honour Wayne, TVFC have dedicated the club’s bar as ‘Wayne’s Bar’, with Grant Fowler providing a sign that will hang over the bar in perpetuity. 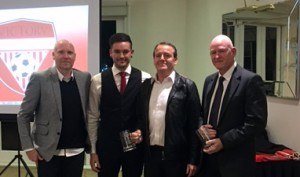 TVFC’s senior coaches, Eamon O’Hare (Men’s Coach) and Tony Wyatt (Women’s Coach) were also thanked and presented with a gift from both the playing group and club. 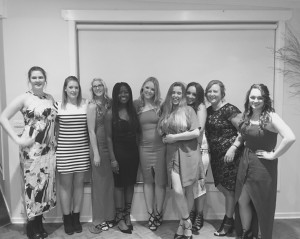 All in all, a successful and entertaining night. 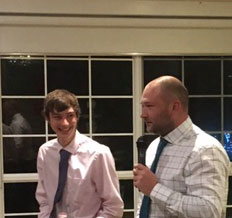 Despite playing a new position in the middle of defence, Mick Byrne had a solid season providing stability and leadership to a youthful reserves team. 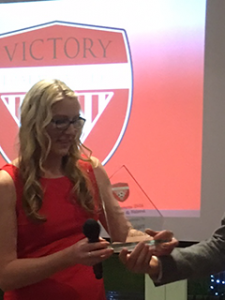 In a tight race for Senior Women’s Best and Fairest, Bridget Wallace narrowly defeated Amanda Hines by 2 votes. Amazingly, the two girls polled 74 votes of a possible 132. Coach Tony Wyatt praised Bridget for her on-field commitment and work rate, as well as her ability to lead the team. 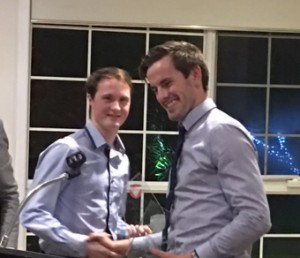 In another tight race, the senior men’s Best and Fairest was decided by 2 votes, with Cohen leading the count right up until the last round. Unfortunately for Cohen, in the last game of the season Connor was awarded 3 votes and secured the award. Connor who’d previously won the award in 2014, has proven to be a highly effective defender at the senior level – and without doubt given more than a few nightmare’s to the strikers around the league.

Winner: Tanya Wallace
After a move to the centre of midfield, Tanya’s possession, ball distribution and improved confidence impressed Coach Tony Wyatt so much that during the presentation of the award he lamented not making the move sooner. Tanya was also praised for her effort and ball winning abilities. 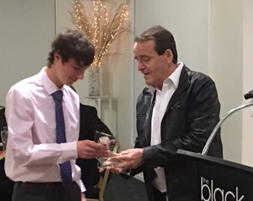 Monty earned the Reserve Men’s Coaches Award for his dedication for training, hard work on game day and supplementing the senior list when required. Many times this year Monty backed up a 90 minute run in reserves with significant minutes in the senior team. 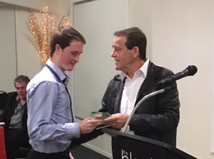 Coach Eamon O’Hare commended winner Cohan for his improved play throughout the season. Cohan displayed a tireless motor this year, playing all 1,980 minutes of the 2016 season (and some in Reserves too!).

Showing that her Best and Fairest award was well deserved, Bridget was the clear choice of her teammates as Player’s player. 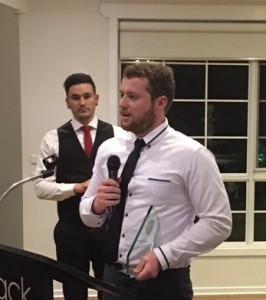 There was no player more worthy to win this award than Sam Jones. Sam was the first TVFC player to move through the club’s junior program into the Senior level. In many ways Sam is the heart and soul of the Traf Men’s team. Despite a difficult year with the loss of his father, Sam was consistently a positive and uniting force, willing to do the blue collar work that’s required to make a team successful.

Club person of the year

The were two incredibly worthy nominees for the 2016 Club Person of the Year award, those being Kara Kimberley and Dylan Wyatt. In 2016, both nominees undertook committee membership, junior coaching responsibilities and co-ordination/delegate roles. As if this wasn’t enough, both nominees spent countless hours improving the clubrooms, running the canteen and organising other volunteers.

TVFC is grateful to have such outstanding members within the club, and in some ways it is unfortunate that only one is singled out for this award.

The winner of this year’s Club Person of the Year was Dylan Wyatt. In 2016 Dylan was President of the club, coached the Under 16s, was the senior LVSL delegate and the lead in procuring our new Club Merchandise. Though unable to play this year due to injury, Dylan is also a key member of the Senior team – and has played the role of unofficial life coach to many of his peers. 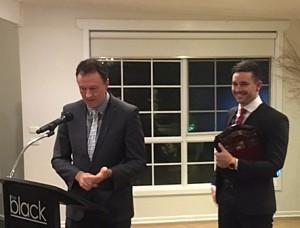