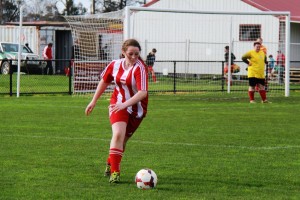 The GSL have recently advised TVFC and other GSL clubs that “in 2015 girls will only be allowed to play in girls only teams, this will included Mini Roos all the way to Senior Women’s football”.

This decision has huge implications for all GSL teams, Trafalgar Victory included. Nearly all TVFC teams of the past had girls in their squad. However, following the league’s directive this means that TVFC must actively recruit female players of all ages to ensure there are sufficient girls only teams at the club.

An official communication from the GSL stated that “Once clubs have their numbers for junior girls, the final format and structure of the girl’s competition will be announced”.

Effectively all GSL clubs are being strongly encouraged to find more female participants across all ages. Once the league has numbers from all teams they will then decide which girl’s age divisions will run and via what format (ie. 11 V 11, 7 V7, full pitch, half pitch etc.)

The TVFC Committee strongly urges all TVFC members to encourage all girls interested in playing soccer to come along to registration day on Saturday the 21st February at the soccer grounds from 10am – 2pm.