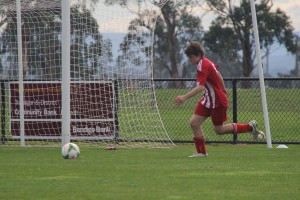 Upon a heavy waterlogged pitch, the Victory U14 Boys played second placed Falcons at Trafalgar as their Round 14 opponent. Once again there wasn’t much separating the two teams and the match was a tight affair with both teams producing plenty of scoring opportunities.

The Trafalgar central midfielders in Josh Porter and Michael Judd were winning plenty of the ball and both players were creating space and providing nice passes to their team mates around the ground. However, Falcon’s were getting plenty of drive along both their wings and keeping Michael Wallace and Lachlan Burke extremely busy in their defensive roles.

Stuart Beckley again defended grandly, as he has done so all season long. Unfortunately for Stuart and the Trafalgar team, Tobby Budd played the vast majority of the math with an injured leg which reduced his speed and mobility considerably. Despite being reduced to the speed of a mere mortal, Toby still played a cracking game and defended well upon one leg only.

Logan Winter played a dazzling match up front and defied the terrible wet weather to entertain all present with some delightful footwork. It was only the cross bar that denied Logan a first half goal following a superb run deep into the box.

At half time the score was 2-0 in favour of Falcons. Despite trailing by two goals the boys were well and truly in the match and there was considerable optimism within the camp.

The second half was also an even contest and scoreless for a large portion of play. However, it was Falcon’s strikers who were the main difference in the two teams. Their speed and accuracy in front of goal was superior to that of Trafalgar.

Where the Falcon strikers were prepared to share the ball in front of goal, Trafalgar were not. There were numerous opportunities where Aedan Rothmeier and Hamish Brace made superb position free in the attacking box, only to be overlooked for a much lower percentage solo shot on goal. This is one of the main reasons Trafalgar Victory currently sit 6th on the ladder and struggle to beat the very top teams.

Logan did manage to peg one goal back late in the match courtesy of a lovely timed strike. However, as the game unfolded the TVFC defence were broken down repetitively to concede late goals. Falcons went on to win the match 5-1.

Coach Mark was pleased with his team’s performance. He made special mention of super goalkeeper Josh Rothmeier who made numerous quality saves as well as a brilliant penalty save late in the match. Josh’s glove work was, as always, technically impressive. But it was his courage and determination that were his most outstanding attribute as a keeper on the day. Great work Josh!

With only two matches remaining in the season proper, the team look likely to play finals football. An upset win next week against league leaders Fortuna would make this likelihood a certainty. It looks like a season that will run right down to the wire.

This week’s Traf Boys and Menswear award was given to Joshua Rothmeier for his magnificent goal keeping.