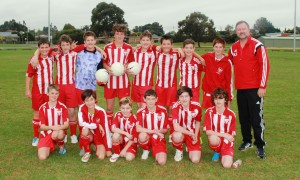 If the Round 1 match played at Howit Park in Bairnsdale is any measure of the season ahead, the Trafalgar Victory FC Under 14s and their supporters are in for a most entertaining year.

This year’s team consists of approximately half new and half returning players and has a distinctive Warragul look to it.  With six new Warragul/Drouin based players the team is indeed a regional squad.  With such a changed line up from last season and with no practice matches to speak of, there were many questions about how the group would perform in their season opener.

Early signs looked quite ominous with East Gippsland scoring twice in the opening 15 minutes, with their power striker, Jarrod Stephens, scoring both goals.  The score line then went from bad to worse for the Victory when the home team took a commanding 3-0 lead twenty minutes into the first half.

Coach Mark Judd and TVFC supporters looked genuinely concerned about the prospect of a blowout.  However, instead of conceding, the boys picked themselves back up and started working themselves back into the match.  Michael Judd and Joshua Porter were pivotal in regaining the centre of the ground, whilst Stuart Beckley and Lachlan Burke applied the brakes upon the previously rampant East Gippsland forwards.

Once the EGUFC’s initial onslaught was over it was Trafalgar’s turn to create scoring opportunities.  Victory opened their account via a superb free kick from Michael Judd that cleared the EGUFC’s defensive line and provided speedster Toby Budd sufficient space to run into the box and finish clinically, with a shot to the top right of the net.  The half time score was 3-1 in favour of the home team.

Following the consumption of numerous oranges and a pep talk from their coach, the Victory boys were set for a huge second half.  Trafalgar scored early in the second half via a nicely timed run from Hamish Brace and superb service which set up a one on one with the East Gippsland goalie.  Hamish took the opportunity with both hands and calmly slotted his first goal for his new club.  The score now being 3-2 and the pressure was obviously back on the Bairnsdale based team.

The longer the match went the better the boys in red and white played.  The once dominant EGUFC team suddenly found themselves chasing the ball as Trafalgar gained ascendency in possession via controlled passing.   Jackson Clerks and Connor Ibbotson willed themselves into every contest and neither gave an inch to their opponents.  Both boys worked extremely hard to turn defence into attack.

At the 50 minute mark Trafalgar were awarded a corner kick and what unfolded resulted in one of the nicest junior goals seen by many at the ground.  The kick was taken by Michael Judd who sent the ball into the middle of the box where Joshua Porter eagerly accepted a clean header into the back of the net, giving the EGUFC goalie no chance.  It was superb to see an Under 14 corner kick reach a team mate on the full and headed with control and accuracy.  Quality football! At 3-3 the game was indeed back on.

For the vast majority of the remaining time both teams traded shots on goal.  TVFC goalie Luke Ibbotson played a blinder of a game and made numerous saves, as well as several brave runs out of his box to clear the ball.

Just when the match looked destined to result in a 3-3 draw EGUFC, against the run of play, managed to score one last time to take the lead with only minutes left.  It appeared that Trafalgar had given their best shot and just fallen short.  However, as they had done all day the boys refused to give in and kept working the ball towards goal.  With only a couple minutes on the clock Michael Judd was awarded a free kick 35m from goal following a rather crude tackle from an opponent.  With the time counting down, Michael went back and took his shot.  The kick avoided the East Gippsland wall as well as the outstretched hand of the goalie and found the back of the net to level the match 4-4.

Michael and his team mates celebrated with much enthusiasm and it was clear to all present that this group of boys indeed have heart, courage and much determination.  When the final whistle blew the game was finished with both teams taking away a well-deserved point.

It was a great game for players, coach and parents alike.  The performance showed some real grit and an excellent team performance across the park.  Coach Mark had asked of his players prior to the match to play out the entire game and give their best.  They most certainly did. 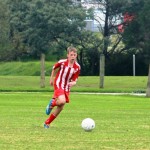 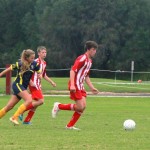 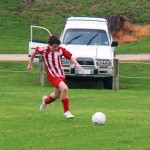 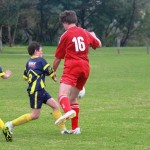 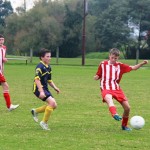 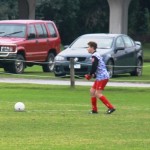 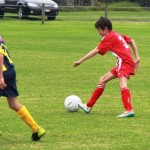 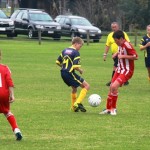 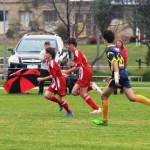 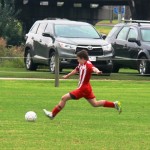 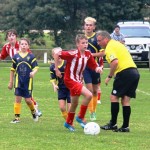 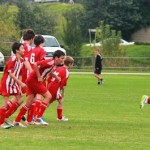 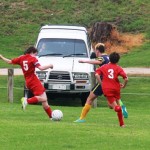 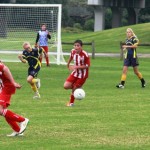 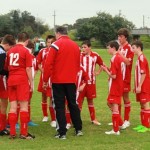