TVFC Under 14s Are “Best in the west” 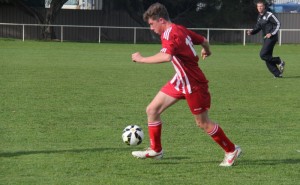 After recent wins against Moe, Newborough-Yallourn and more recently Monash SC, the Trafalgar Victory FC Under 14 could well be considered by some as the “best in the west”.  However, despite winning five of their last six matches, the team are not getting ahead of themselves.    The boys learnt all too well what happens when they are not “switched on”, when they capitulated against Sale White less than a month ago.

The team has shown great improvement and real team spirit throughout the season to date and are looking to further develop as the season unfolds.  It is true that winning is a habit and right at this moment the Victory boys are seriously enjoying a fine vein of form.  Never has the theme song been sang so often in recent times at Trafalgar and the boys are shouting it out with some real passion.

This week’s match against Monash was a tight tussle, for the first half at least.  There was an early period in the game where Trafalgar maintained good possession and linked up well across the park.  It was all started in the backline where captain Stuart Beckley directed play and provided outstanding service to his midfield.  He was ably supported by Toby Budd who used his pace effectively to clean up any threatening Monash attacks.

Once the ball reached the midfield it was well controlled and effectively distributed by the entire mid flied combination.  Michael Judd and Joshua Porter owned the centre of the pitch and both boys demonstrated excellent touch and evasion skills as they provided considerable drive and connection between the backs and forwards.  Both Nic Tammes and Hamish Brace took up where they left off from in their most recent match against Sale.  Nic was taking on and beating his opponent regularly, whist Hamish’s work rate was first class throughout the entirety of the match.

Up front the team started with Flynn George and Logan Winter who both made several promising runs into their attacking box.  However, for all their dominance around the ground it took well into the first half for Logan Winter to score the first goal.  Logan’s goal was courtesy of a lovely pass from Joshua Porter and via a trademark goalie chip.  A very nice piece of football all-round.  Late in the first half Trafalgar looked to have extended the lead to 2-0 when attacking midfielder Michael Judd sent the ball into the net from the top of the box, only to be denied by club referee Templar Hankinson (party pooper!),   who adjudged TVFC forward Jackson Clerks to have been offside despite having not touched the ball.  At the conclusion of the match Michael stated that the referee made the right call as Jackson had obstructed/distracted the keeper from making the save – so maybe a good call from the referee.  The half time score was 1-0 in favour of Trafalgar.

In the second half the flood gates opened both in terms of goals and the local weather.  All players were wet and cold, yet both teams were committed to the challenge.  Striker Logan Winter, fresh from his half time break scored consecutive goals early in the second half to extend his team’s lead to 3-0.  His second goal of the match came from a 40m killer pass from Joshua Porter that left the Monash defence flat footed and Logan “drooling at the mouth”.

At this point in the match Coach Mark took the opportunity to try several players in different positions.  One of the success stories of the day was using Connor Ibbotson as a defensive central midfielder and releasing Joshua Porter into attack.  Connor intercepted many Monash plays and his laser like passing was brilliant as he set up his forwards over and over again.  Joshua also enjoyed the greater freedom of being a striker and was given great support from Toby who was also given a run up front towards the end of the match.  It was great to see Joshua score, not once but twice in the second half.  His first goal demonstrated his superior strength on the ball.  As he was approaching the box to take his shot on goal, he was bumped forcefully by a Monash opponent in an attempt to knock Joshua of the ball.  The end result of which saw the Monash defender on the ground watching as Joshua beat the keeper one on one.  The second was a lovely finish from a 40m dash by Toby who set Joshua up beautifully again right in front of goal.

At a score line of 5-1, Coach Mark further rearranged his team’s set up in order to give all a fair run.  In doing so Stuart Beckley was left with a somewhat inexperienced backline who proceeded to concede 2 goals in 5 minutes.  With the scoreline at 5-3 and with only minutes remaining the “fab four” backline was reinstated and as they say in the classics, “That was all she wrote”.  A good win to Trafalgar 5-3.

Johann Rothmeier summed up the performance well when he addressed the team in the change rooms.  He stated that when the ball was being passed around in triangles the opposition had no answer.  However, when players were played out of position the team was exposed.  He encouraged the boys to maintain the possession based and structured game for longer as this is what the stronger teams in the competition do.

All is set for a cracking match next week against third placed East Gippsland United.  The boys drew with this team in the first round of the season and are keen to do one better on their home pitch.

The Traf Boys and Menswear team player award was given to Hamish Brace for his commitment and work ethic.  Whilst a second award was presented to Luke Ibbotson for self nominating and assuming the unenviable job of being today’s 17th man.