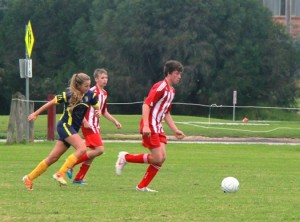 Trafalgar’s round 12 match against East Gippsland United FC was an amazing match for all to be involved with. For the players, spectators and coaches alike it was a classic encounter that thrilled all from the first whilst to the last.

The match promised a great deal and it didn’t fail to deliver. EGUFC were positioned third on the GSL ladder prior to the match and Trafalgar sixth. So both teams had a great deal to play for with the finals only a matter of weeks around the corner.

To be honest EFUFC had the better of both halves and the match was predominantly played in Trafalgar’s defensive half of the ground. Accordingly, the TVFC backline worked overtime to keep the EGUFC strikers at bay. The defensive four (Stuart, Toby, Lachy and Michael W) each played a brilliant match, and they needed to in order to keep the fast and strong EGUFC forwards from scoring.

In recent week’s Josh Rothmeier has taken the majority of goal keeping duties. However, with Josh busy with his school’s drama production, it was all up to Luke Ibbotson to guard the goals for Trafalgar. Luke played a superb match and made several quality saves, several of which were pure reflex. There were many pats on the back for Luke this week as he kept his team in the match on several occasions.

The difference in match intensity and speed of ball movement was evident this week. Over the past six matches, Trafalgar has played several teams in the bottom half of the ladder. However, this week it was game on from the very first kick off. The Trafalgar midfield were kept very honest this week and genuinely missed the speed and touch of Nic Tammes, who was not available with a broken arm from the previous week. Whilst Michael and Josh worked manfully in the centre of the ground, their opposition made it very hard by shutting down space and closing options very quickly. The wing midfielder also faced numerous challenges form EFUFC’s grand passing and superb ball movement. However, the Victory boys weren’t about to pack it in and give up.

By half time all players were more than ready to suck on an orange and take a well-earned drink. The Trafalgar backline had held off the opposition, yet the forward line of Logan and Flynn had not as yet penetrated the EGUFC backline either. The half time score was 0-0. Some very worthwhile points were raised by the team at the half time break and strategies were discussed within the confines of the team huddle.

The second half was much of the same, a real arm wrestle. The best chance of the day came when Logan was released for a one on one challenge with East Gippsland’s goal keeper. A beautiful pass put Logan in the driver’s seat. However with a huge burst of adrenalin, Logan lifted the ball over the crossbar. Meanwhile EGUFC had some strong chances also. Eventually it was the visiting team who made the most of a one on one with Luke, who despite a valiant dive just missed keeping the ball out of the goals. After such a struggle, it was a real pick up for East Gippsland and a bitter pill to swallow for the Victory team.

The time was counting down and it appeared the game had slipped from Trafalgar’s reach as the match entered its last minute. With play maker Michael J on the bench exhausted and key defender Stuart injured there was only one more roll of the dice left in the team. Midfielder Josh P launched a massive free kick over the defensive line and found striker Logan open on the left hand side of the pitch. Logan who has worked extremely hard all match, put his head down and made one last final run to the goals. On a very narrow angle and with mere seconds remaining Logan took a shot at the goals. Players from both teams watched in amazement, as did the spectators, as the shot somehow got through the outreached arms of the diving EGUFC goalie. GOAL!!!

Before anyone had time to attack the kick off the referee blew his whistle to signify time and the game had ended a 1-1 draw. The Victory boys were delighted, none more so than Logan. To be honest this draw was as impressive as any of the more recent wins. It came against a quality opponent and was only earned via a full match effort. Whilst there are several areas for the team still to work on, there is much to like about this plucky group of boys who refuse to give up. A most impressive effort by all in the squad.

There is no let up for the Trafalgar lads who next week take on the now third placed team Traralgon Olympians. The boys have been eagerly awaiting this return match having outplayed this team earlier in the year only to wasteful in front of goal. It promises to be yet another cracking match, so be sure to come and watch the lads next Saturday as they travel to Traralgon to take on Olympians.

This week’s Traf Boys and Menswear team player was Michael Wallace for an outstanding match at left back against a member of the Victorian state squad.