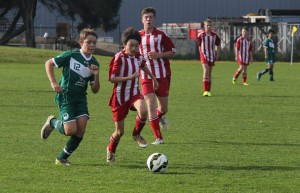 It wasn’t that long ago, back in Round 5, that the Trafalgar Victory Under 14 Boys were yet to win a game.  Fast forward five weeks on and the same team are now on a roll and enter the mid season break with a 4 win, 4 loss & 2 draw record.  The last six weeks in particular have provided all four wins and one of the two draws.  The team are indeed in a rich vein of form.

This weekend’s match against Sale Green may well be defining for the team and for several of its players.  The lads were seriously challenged by Sale who at one stage lead the match 3-1, not far from the half time break.

TVFC started the game in good form and looked to be moving the ball well, holding shape and defending grandly.    However, a moments lapse and Sale striker Callum Campbell, split the Trafalgar defence and converted well to gain an early lead.  With the team down early in the match it was Logan Winter who squared up the game with a lovely right footed goal.  Logan is a weekly scorer and can be counted upon when the chips are down and someone has to stand up.  He loves a challenge and no backline is too strong to contain this feisty competitor.

Whilst the game was back on even terms, the Trafalgar boys looked sloppy and somewhat disinterested in the contest.  Accordingly, it was Sale who once again took the ascendency when they scored for a second time.  All over the ground the Trafalgar team were missing passes, taking on one too many players and turning the ball over.  When Sale scored for a third time, from a swinging boot that fortunately bounced over Josh Rothmeier in goals, it looked like a challenge too hard for the Trafalgar team to over come.  The score line showed Sale up 3-1 with only minutes to go before half time.

Parent and confessed team “groupie”, Johann Rothmeier made two grand statements on the sidelines this week.  The first of which was “We need a goal before half time in order to give ourselves a chance”.  Well it was as if he had rubbed the genies lamp.  Within a minute Logan once again popped up to score just before the half time break to give his team some hope with a deficit of 3 goals to 2 at the break.

At half time, Coach Mark Judd challenged his troops to lift.  He asked them if they wanted to win and climb the ladder, or lose and drop down towards the bottom rung?  In particular he challenged his two wing midfielders, Nic Tammes and  Hamish Brace to get more involved and to take on the challenge.

The second half of the game may well prove to be defining for this team.  With desperation, hard work and a “never give up spirit” the boys worked there way back into the match and began winning the contest.  Both Nic and Hamish proved pivotal in the turning of the tide.  Suddenly Nic was taking on his opponents and winning every contest.  He linked beautifully with fellow mid fielder Michael Judd to carve numerous runs along the left hand side of the pitch. Nic provided cross after cross into the goals for his team and played like a man possessed.  It was great to see him take on the challenge and absolutely dominate his position.

On the right hand side of the pitch too, Hamish seemed to have an extra yard or two in his stride.  His work rate had obviously increased and he was making every effort to apply pressure and make tackles.  Even without the ball Hamish played a desperate brand of football, causing his opponent to lose the ball on numerous occasions.  His second half definitely proved that even if you are having an “average day” you can still work hard and do your part for the team.  However, Hamish didn’t just work hard for his team he was making space and linking superbly with Lachy Burke and Joshua Porter to make a dozen or more runs up the right hand side of the field.

So with Trafalgar owning both the left and right had wings and with Michael and Josh controlling the centre it was only a matter of time before the goals followed.  No prize for guessing who levelled the match at 3-3.  Yes, you got it Logan (well it is the Winter season!).  After previously missing the goals narrowly and hitting the wood work also, Logan evened the score line and it was “game on!” for the remaining 10 or so minutes.

It must be stated just how well the back four and Josh Porter worked in the second half.  Both Lachy Burke and Michael Wallace forced play out wide, jockeyed their opponents and covered their wings amazingly.  Whilst, Stuart Beckley and Toby Budd, mopped up anything that got into the defensive half.   The back four worked superbly together and shut down the Sale forwards completely in the second half.  No more goals against Trafalgar this half.

With five minutes or so the stage was set for the killer blow and on this occasion it came from the brand new fluro shoes of Michael Judd.  Seriously, these shoes should have been sold with a volume or contrast control.  I am not sure if it was the awesome kick at the top of the box or that fact that the goalie was blinded by the shoes.  But whatever the case, Michael’s shot hit the bottom edge of the crossbar to land behind the line and to put Trafalgar up 4-3.  The backline handled a last minute challenge from Sale and saw the ball clear to record a fourth win from six matches.

The result truly was deserved given the turn around from the first half.  The team owed a great deal to Logan who kept them in the match during the first half and to Nic and Hamish for their awesome second halves respectively.  The backline and keeper Josh Rothmeier are to be congratulated for keeping a clean second half sheet.  It was indeed and great victory for the Victory!  Well done boys, you earned this win!

Oh yes.  The second grand statement from Johann was “That if the boys didn’t lift their game then they would be going home by train!” Whilst this somewhat harsh comment seems a little on the tough side, it seemed to work as the boys responded grandly.  All associated with the team look forward to Johann’s next inspirational talk (threat).

The boys should all enjoy their week’s break and look forward to the second half of the season, entrenched firmly in the top half of the ladder. Based upon the recent renditions of the team’s song, I think many club’s now know who we are (“Who are who are who are we … )