TVFC U14 Push Olympians All The Way 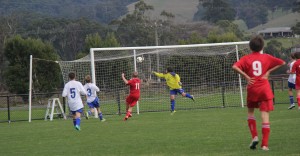 Round 2 of the GSL Under 14 season took place this weekend with Trafalgar Victory FC taking on Traralgon Olympians, at Trafalgar.  Following a most exciting match in Bairnsdale, played two weeks ago, the boys were absolutely raring to go.

Despite “a good start” being the main pre-match focuses, the lads wearing the red and white found themselves down two goals in the first five minutes of the match.  Not exactly the “good start” that coach Mark had hoped for.

Following the initial Olympians dominance the Trafalgar team started to work its way back into the match.  Toby Budd was simply blistering along the right wing and with quality service from Joshua Porter, Toby found himself one on one with the Olympian’s keeper on several occasions. Unfortunately for Toby his goal radar was a little off today.  However, his pace, timed runs and control of the ball was just amazing.

In the backline things were looking up also.  Stuart Beckley rallied his chargers and put the clamps on the Olympian forwards.  Lachlan Burke was once again extremely dependable on the right side of the backline, clearing numerous Traralgon advances and linking very well with Hamish Brace along the right wing.

On the left side of the pitch Jacob Holmes was trying a new position as left back and his speed and quick feet were very much needed as he took on a much larger opponent.  Jacob linked well with Nic Tammes, who himself won his own fair share of the ball.  Nic looked very comfortable in the middle of the park and had an excellent match.  He too supplied many great passes to Logan Winter who played his first match for his new club.

In fact it was Logan who scored the first goal for Trafalgar.  After several promising attacking runs, Logan broke through the Olympians backline and scored his first goal for his new club.  His team mates all “got around him”, as the boys like to say, and celebrated.  The half time score was 2-1 in favour of the visitors.

The Trafalgar boys were very buoyant about their chances at half time and were set for the challenge that lay ahead.  However, only five minutes into the second half, Olympians caught Trafalgar napping once again and extended the half time lead to 3-1.  The equation had just got harder for the home team.

However, as they had done in the previous match, the Trafalgar boys kept working hard for one another and never gave up.  The team had many shots on goal and several came extremely close to scoring.  Youngster, Aedan Rothmeier, enjoyed a run up front and generated considerable drive for his team.  Whilst his brother Joshua made several saves for the team in goals during the second half.

Eventually the hard work paid off when Logan scored for a second time to bridge the gap back to 3-2.  Logan worked tirelessly up front all match and always kept the opposition backline guessing and on their toes.

As in round one, the longer the team played the better they got.  However, unfortunately this week, time ran out for Trafalgar to kick an equalising goal.  The end score being a very respectable 3-2.

This week’s “team player” award from Traf Boys and Men’s Wear was awarded to Lachlan Burke for his excellent match at right back.