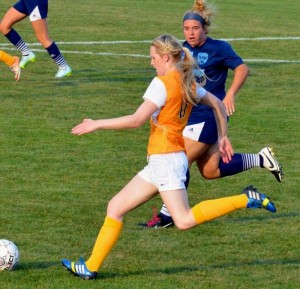 When only in Year 10 TVFC Women’s player, Bridget Wyatt, signed up for a Gippsland try-out session with American recruiting organisation, NSR (National Scouting Report).  Bridget, like many other girls playing in the GSL at the time, attended the try-out night at Traralgon where they were allocated into small teams and had to play multiple short games.  After the sessions, Bridget and her family thought that some of the best players might be a chance to be selected.  However, Bridget did not consider herself a chance.

Following these sessions Bridget received notification that she was being selected, conditional upon an interview and satisfactory school grades.  Bridget’s grades were fine and she interviewed well also.  As a result she was recruited by NSR.

Bridget’s father Tony explained that they had to pay $5000 to ‘process’ Bridget through the set-up of a website, the loading of videos that they provided from games, and the eventual promoting of Bridget to Universities across America.  Tony further stated that “this all took a few years and the concept is that her promotion through her website and the NSR scouts culminates in  offers from Universities around the time that she finishes year 12 in order to start in the US the following July/August which is the commencement of the US university year.”

After her website was set up Bridget started receiving ‘hits’ from coaches who were effectively showing some kind of interest and presumably viewing her game videos.  It was a difficult time for Bridget because the videos obviously need to show consistent good performances at the same time as dealing with year 12 school pressures as well as the notion that soon she might be leaving home for 4 years without knowing anything about what it will be like over there.

Tony and family decided of their own accord immediately after year 12, to take Bridget to the US to visit some universities so that she would have a better idea of what might be ahead so that her decision would have more certainty.  He explained that “We picked a few universities that were on her website ‘hit list’ and arranged to meet coaches.  This trip turned out to be very fruitful as Bridget became certain that the environments were going to be welcoming and exciting as a result of spending time with players and coaches and seeing firsthand the brilliant facilities that most universities have there.”

After the visit it was back to playing, more videos, and hoping to attract attention.  Tony mentioned that NSR wasn’t a lot of help and seemed to be aiming at the easiest placement that was coming along.  It is very difficult gaining an understanding of the levels of university standard given that there are 4000 universities in the US.

Tony outlined some of the challenges faced by Bridget “After some interest was shown by a coach that we had met in the US, NSR told us that Bridget was not eligible to play at that university because they played in a competition that required different academic results than others, so we had to re-set our targets on other universities.”

NSR eventually presented Bridget with a few options in the mid-west.  The Wyatt family spoke to some coaches on Skype and agreed to sign up with a university in Des Moines Iowa.  However, only a few weeks before Bridget was to leave, they received a call from the coach to say that the university’s program was being dismantled as they had been taken over by a large university.  This was a shock but luckily that coach had already promoted Bridget to the coach at Graceland University south of Des Moines.  The family spoke to him and it was agreed that Bridget would go with Graceland.

Bridget and Tony flew there in August 2015; they arrived on a Wednesday and the team had their first game on the following Sunday which was a ‘baptism of fire’ to say the least.  It is a very strong competition allowing very little time on the ball so the game pressure is high.  The squad is large with nearly 30 players so there is a high level of competition just to get game time.  They play usually 2 games per week and train most days during the season so the girls get very tired and injuries are common.  Luckily the season only runs for 2 concentrated months.  The university offers a very inclusive environment where there is a lot of support so that home sickness doesn’t become prevalent.

Tony reports that Bridget is enjoying it so far very much.  “They appear to be having lots of fun amongst a lot of hard work and she has made some very strong friendships already.”  Bridget has been invited to go to an American team mate’s house in Little Rock, Arkansas for Thanksgiving weekend at the end of November.  There is no doubt that this will be a life changing experience for Bridget and one that will make her stand on her own feet quickly and show what she is made of.  At the very least she is having a great time and broadening her cultural horizons.

The soccer is just finishing for her first season so Bridget can spend more time on her studies; she is studying Sports Management and an MBA combined which will give her good opportunities later.

TVFC is extremely proud of Bridget’s achievements to date and wish her the very best with her soccer and studies in the state.  It is a huge call to leave family, friends and indeed country to follow your dreams. Bridget has thrown herself at an opportunity of a lifetime.  Clearly there has been a great deal of preparation and determination to make this dream a reality.

TVFC would like to thank her father Tony for providing a detailed written description of Bridget’s application process and experience to date.  Her story is inspirational and one I am sure that all members at Trafalgar Victory FC will watch with considerable interest.