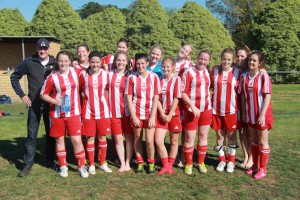 The Trafalgar Senior Women’s team have continued their recent run of good form, this time accounting for the East Gippsland United team.

Unlike the previous week’s win over Falcons, where the girls started slowly and had to work their way back from an early deficit, this week the girls hit the scoreboard early and repetitively.

It only took a matter of minutes for Trafalgar to gain ascendency in the match via outstanding wing play from Caitlyn Mathews.  Caitlyn carried the ball brilliantly and absolutely owned the left side of the pitch.  She link well with midfielder Bridget Wyatt to cause the EGUFC defence some real headaches.

In the first half alone Caitlyn had scored twice, one of which curled around the near post, hit the far post and went into the back of the net.  She also produced the pass of the match that cut the East Gippsland backline in two and set Kelly-Lee Soles with a comfortable one on one with the keeper.

Defensively, the team looked sound with both Amanda Hines and Caycee-Jo Tatterson covering the backline comprehensively.  Having said this, EGUFC did get one goal past keeper Emily Keilty, who had otherwise been very solid with the gloves.

The second half was a much more even match, for the first 20 minutes at least.  East Gippsland were somewhat fortunate when a shot on goal luckily, or rather unluckily, deflected of Emma Hudson to wrong foot keeper Emily to make the score 3-2.  From this point on the Trafalgar girls lifted their work rate and with second half goals goals to Caitlyn (who ended the day with a hat-trick) and Kelly-Lee (who also scored a pair for the day), the final score line was 5-2 in Trafalgar favour.

Another solid performance for the girls and another 3 points to take the girls to 5th on the Central Gippsland ladder.  Coach Lachlan Wyatt was delighted with the girls performance and enjoyed the win as much, if not even more, than his chargers.