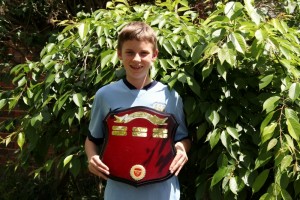 Trafalgar Victory FC Under 14 player, Michael Judd, has been announced as the Angelo Carpinteri TVFC Junior Club Person for season 2015.  Michael at the age of 13 has assisted his club by refereeing the Under 13 Girls team, running the lines for the women’s team, helping with line marking and setting up the recently held 5-A-Side Tournament.  He has also assisted in several training sessions with the Under 13 girls team.

It is great to see young players like Michael getting involved in their football club.  Age shouldn’t be a barrier for any member at our club who wish to make a contribution.  Cameron Wyatt, Josh Porter and Campbell Davies were also nominated for this award.  The contributions of each were publicly recognised at the recently celebrated senior presentation.  All nominees have made a significant contribution to the betterment of their club.

All at TVFC congratulate Michael and the other finalists.  The club also encouraged all junior players to “help out” where ever and when ever they possibly can.