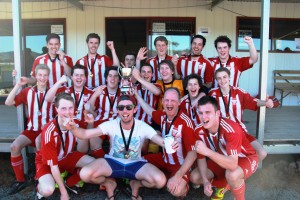 Trafalgar Victory FC President Dylan Watt said that the club “was delighted with the news”, in response to the GSL Boards decision to permit Trafalgar Victory to return to the central division to compete in all available senior levels of competition.

Wyatt explained that “As a club we have been working tirelessly over the years to provide our members with the best football environment possible and we feel as a club that this is another step in the right direction”.

When questioned about the standard of competition the senior aged teams would be playing in, Wyatt stated that “The prospect of competing in the highest division available to our players presents a challenging opportunity, but one that we welcome”.

The historic announcement was made to players following a “meet the coach” post training session yesterday.  The announcement to the senior team was met with great enthusiasm and excitement and the feeling amongst the camp is that the playing group are no doubt up to the task.

It certainly is set to be an historic season for the team in red and white.  There has never been a better time to get behind your local club, or indeed come play at Trafalgar Victory.