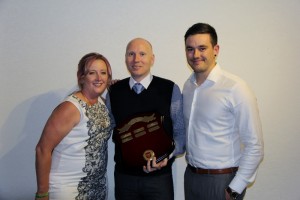 The Trafalgar Victory FC Luke Barker Memorial Best Club Person Award was announced and presented at the recently held senior presentation.  The history of this prestigious memorial award was respectfully presented to those in attendance and the names and contributions of all nominees also publicly acknowledged.

The club received six nominations and the committee then narrowed down the list to a final three.  The contributions made throughout the season by nominees Matthew Beasley, Ashley Klemke and Shirley Guthrie were publicly acknowledged and was the contribution of the three finalists:  Dylan Wyatt, Templar Hankinson and Emma Hudson were also presented.

All six nominated members have made a great contribution towards the betterment of our great club.  However, on this occasion it was Templar Hankinson who was announced as the Best Club Person for season 2015.  Templar, among other things, is a committee member, a MiniRoos Coach and a respected member of the Men’s senior team.

Throughout the season Templar has rebuilt the TVFC website, covered the online aspects of the club secretary role, driven and worked extremely hard upon numerous club-building activities and fundraisers.  He has attended all working bees and managed all alcohol licence applications.  Templar is a most worthy nominee and finalist and indeed a deserving winner of this prestigious and respected award.

During his acceptance speech, Templar quite modestly acknowledge the work of others at the club.  However, based upon the applause he received on the night, it would appear that all at the club are extremely grateful for his contribution over many years now.  Congratulations Templar.