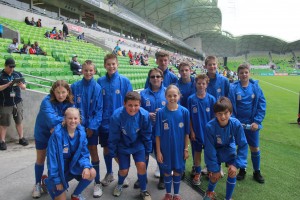 In excess of 50 TVFC members were present at last weekend’s Round 16 A-League match played at AAMI Park between Melbourne City and Western Sydney Wanderers.  Thirteen juniors From the club were official A-League ball boys and girls.  Whilst a further 20 members carried the Hyundai sponsorship mat onto the  centre of the pitch during the half time break.

TVFC have visited AAMI Park over several years now and have over this period of time filled every available volunteer roll.  This includes team mascots, ball boys/girls, Hyundai mat carriers and MiniRoos half time players.  When the then named Melbourne Heart played at Latrobe City Sports Stadium the club also assisted with media promotion of the match.  More recently TVFC MiniRoos players took to AAMI Park on Boxing Day 2014.

Trafalgar Victory FC is extremely grateful of the ongoing support shown by Melbourne City.  The opportunities presented to the club’s MiniRoos and junior players is well received and very much appreciated by all at the club.  TVFC hope to further strengthen its ties with Melbourne City and provide its youngest players with every opportunity possible via the A-League club.