Thrilling win for TVFC Under 14s 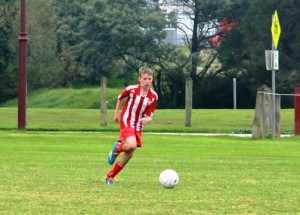 The Trafalgar Victory Under 14 boys have come from behind to snatch their first win of the season against Traralgon City Black on Saturday afternoon at Trafalgar.  The final 10 minutes of the game provided some exhilarating moments for the boys, coach and spectators.  With only minutes remaining in the match, and with the scoreboard showing a 2-1 deficit, it looked extremely unlikely that the home team would take the three points.  But with persistence and some brilliance up front from striker Logan Winter they did exactly that.

From the very start of the match the team displayed a willingness to share the ball and work for one another.  Coach Mark was delighted by how the team linked up with passing across the park.  The first of three goals for Logan Winter came as a result of three superb passes, which culminated with a nice set up by Jackson Clerks to Logan, who calmly shot the ball across the reach of the City keeper.

The Trafalgar team settled well in the first half and looked comfortable on the ball with a goal lead early in the match.  The backline looked strong and held its shape well throughout the day.  Stuart Beckley played a fine match as team captain and made numerous brilliant tackles and clearing kicks.  He was, as always, ably supported by Lachlan Burke and Toby Budd who again kept their opponents under control.  Both boys provided considerable attack from the backline and their ball control and decision making add a great deal to the Trafalgar backline.  It was also great to have Michael Wallace at left back.  Michael loves a contest and never lets an opponent get the better of him.  He works very hard and adds another dimension to the already strong backline.

Keeper Luke Ibbotson played a great game and made many more saves than goals conceded.  Luke is always superb in the air and it takes a very good strike to beat him above his head.  However, this week he made numerous strong saves at ground level, on each occasion he got low and made sure his body was behind the ball – great keeping Luke.

As with all junior aged sport, if a team isn’t switched on then the opposition can get back into a match easily.  And so it was for Trafalgar who had only one moment of poor decision making for the entire half, allowing Traralgon City back into the match.  The score was 1-1 at half time and the game was once again evenly poised.  At the half time address Coach Mark asked his midfield to move the ball quicker.  He explained that the boys in the middle of the park were winning the ball well but then turning it over by holing onto it just one touch too many.

The second half was again a very close and even affair.  The Trafalgar midfield started to move the ball quicker with Michael Judd leading the way.  Michael linked up well with fellow midfielder Jacob Holmes.  Jacob had a superb second half and carried the ball beautifully to advantage his team mates.  Josua Porter also made an impact in the middle of the ground by making greater use of his strength and skills to put his team mates into good positions.  Joshua is an extremely talented footballer who is developing nicely in the middle of the pitch.

Half way through the second half, Traralgon City scored for a second time to take the lead.  After all Trafalgar’s hard work they were in an all too familiar position trying to save a match with only minutes left.  In response Toby was moved to the left striker and Logan switched to right striker.  Within minutes Logan made a lovely run down the right side of the pitch and chipped the outstretched arm of the keeper to bring the match back to 2-2.  Whilst the goal was superbly struck it was noticeable that fellow forward Toby had also made an excellent supporting run into the box that created significant doubt and hesitation in the mind of the City keeper.  It does go to show that every player can contribute by supporting a team mate – great goal Logan and great support Toby.

So the stage was set for an epic finish and once again it was Logan who supplied the excitement in the closing minutes of the match. In almost a carbon copy of his previous goal, Logan was presented with an opportunity to make a run up the right wing.  He took the opportunity with “both feet” and charged towards the rapidly approaching goals.  He took care of the full back easily which placed him one on one with the goal keeper. On this occasion the keeper got a finger to the ball but once again Logan was calm in the situation and made sure Trafalgar would enjoy a well earned victory.  As the ball sailed into the net the boys “got around” Logan and celebrated the match winning goal.

The remaining few minutes seemed like half and hour for the players and supporters who were all desperate for the Trafalgar boys to taste their first victory of the season.  However the lads held strong to record their first win of the year and all enjoyed the game.  The win was just deserves for a team that has worked very hard and who enjoy their football immensely.  It was great to see the team play well and everyone make a contribution towards the result of the match.  Well played boys!