The Rise and Rise of the TVFC U13 Girls 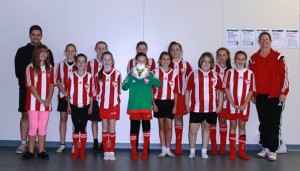 “From a team that collectively had played only a handful of matches, to one that is working superbly as a combined group” is best how one would describe the transformation that has occurred with the TVFC Under 13 Girls team.  Only three of the team had ever played club soccer prior to this season, whilst for eight of the girls this was the first time they had ever played the sport.

The development of the girls over the past three months is amazing and the fast track skills acquisition of the team even has team coach Shirley Guthrie impressed.  Coach Shirley was delighted with how the  FFA based coaching plan, that focuses upon the four core skills (running with the ball; first touch; 1v1 & striking the ball), has progressed each and every member of her team.  The team now has structure and the girls pass the ball beautifully to one another. Coach Shirley says she is “really impressed with the girls short passing. This has helped set up many goal scoring opportunities”.

This weekend match against first round opponents Falcons demonstrated clearly just how far the Trafalgar girls have come in the first nine weeks of the season.  Whilst the girls won the match with an impressive 12-0 score line, it was the manner in which they played that was the real headline of the game.

Captain Haylea Porter is an amazing leader even at the young age of 12.  She has superb skills and has the capacity to bring others into the game.  She often sacrifices her own game to provide opportunities for others in her team.  She is ably supported by the experience and determination of our Canadian import Veronica Mykytiuk.  Veronica reads the play exceptionally well and is a most dependable mid fielder.  She too sets up her team mates time after time and is a delight to watch.

Up front the team has the tall, fast and talented Alyssa Neale.  Alyssa has blossomed into a powerful forward this season.  She is extremely fast and her speed causes her opponents considerable difficulty.   This girl is one to look out for.  She is a raw talent, who given additional soccer training looks to be a genuine scoring option for the season and beyond.

Both Chloe Alison and McKinley Mitchell are tenacious goal keepers.  Keepers are a special breed of soccer players and both girls definitely have that “X factor” about them.  It takes a great deal of bravery to put on the gloves and stand in the goals.  However, Chloe and McKinley do this week in week out.

The Brown twins in Maddison and Olivia are determined young girls and both are developing into strong soccer players.  To take a quote from Maddi this weekend: ” At the start of the season I didn’t know much about the game, but now I know how to play soccer “.  This is a fair comment and one probably that is reflective of many of the girls in the team.

Taiya Marslen and Tia Gray , who’s similar first names gave Coach Shirley some headaches at the start of the season, have progressed really nicely.  They have both improved their kicking and understanding of the game and both are not afraid to get in and have a go.  Allyssa Giles is another determined and motivated player who gives her all to the team and works hard from the first whistle to the last.  Renee Duxbury is gaining increased time on the pitch as her skills improve and as she grows in confidence.

Coach Shirley has done a marvellous job bringing this team together and teaching them the many lessons associated with what is to many a somewhat foreign game.  She has been well supported by several of the senior women players whom have been only too happy to offer their assistance.  The parents of this group also have got right behind the girls, none more so than team manager Greame Rankin who’s efficiency and organisation is very much appreciated by all associated with the team.

All at TVFC look forward to watch the progress of this team over the second half of the season.  If their development continues at the current rate, their journey will be one that provides a great deal of fun and enjoyment along the way.   All the bests for the season ahead.