Phil who had a decorated football career both locally and as a national goal keeper, was an assistant coach at our club for our inaugural women’s team back in 2009, and senior women’s coach in season 2010.

Phil shall be fondly remembered as a much loved member of our club who, even in his later years, displayed a passion for football and its development at a community level.

Phil generously donated his time to Trafalgar Victory FC even before his appointment as a member of the coaching team.  He was particularly dedicated to assisting up and coming goal keepers and he would be at training come rain or hail.  Despite being in his seventies, Phil demonstrated the enthusiasm and energy of a man half his age.

Phil was a true gentleman who treated all under his care equally and with genuine care and respect. He will be greatly missed. 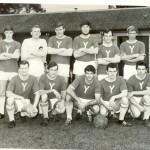 A younger Phil Blunt as the Yallourn SC goal keeper. 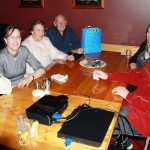 Phil Blunt with wife Joan at the 2010 TVFC Senior Presentation evening. Phil was the Snr Women’s coach for the 2010 season.

The Funeral Service and Committal for Cremation of Mr Philip Blunt will be held at Latrobe Valley Funeral Services Chapel, 6 Ollerton Ave, Moe on FRIDAY (Apr. 24) at 2 p. m. No flowers by request. Donations to Gippsland Cancer Care Centre would be appreciated.  Envelopes available at the Service. Private Cremation to follow.