Four Goals But No Points For TVFC U14s 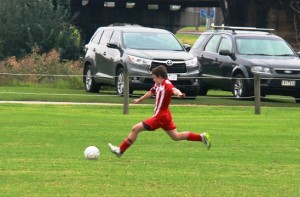 The Trafalgar Victory FC Under 14s played Falcon’s in their Round 3 clash at Latrobe City Sports Stadium.  The match was played at a frenetic pace and the speed and skill of the Falcon’s team demonstrated exactly why they currently sit atop the GSL ladder.  However, the Trafalgar team also lifted their game to another level and played the best game of their season too date.

The vast expanses of the of the Falcon’s pitch provided the background of a very free and fast flowing match with both teams making numerous forward dashes.  As has been the trend of recent matches, Trafalgar conceded two goals early in the match making their task, once again, that much harder.

To their credit the boys in red and white worked really hard and it wasn’t long before our guys pegged a goal back against the trend of play, via a lovely run and finish from Toby Budd.  Its was noticeable that some of the Trafalgar players were really up for the challenge and striker Logan Winter was most certainly ready to take on anything that the Falcon’s threw at him.  Logan played his best game of the season to date and put his heart and soul into each and every contest.  Whilst falcon’s managed two more goals in the first half, Logan’s first goal for the match just before half time drew the game to a nice 4-2 margin.

The second half of the match continued to be a dower struggle.  However, Trafalgar were starting to win more ball in the middle of the park courtesy of midfielders Josh Porter and Michael Judd.  Both boys played hard for the full match and kept the Falcon’s midfield very honest.  In the backline team captain Stuart Beckley played a blinder of a game and defended grandly to keep his side in the match.  He was ably supported by reliable defender Lachlan Burke who continues to make the right decisions and generate considerable run out of the backline.

When Logan scored for the second time in the match, Trafalgar had narrowed the margin to 4-3 and were coming home with a wet sail.  However, the Falcon’s main striker weaved his magic and pushed the home side a further two goals up.  Once again the Trafalgar boys pushed hard and were rewarded for their troubles via an opportunistic goal from midfielder come striker Nic Tammes.

By the games end Falcon’s had won the match 7-4.  However, the Trafalgar team played really well and pushed their opponents all the way, causing them some genuine concerns throughout the match.  Whilst the team currently sits low on the ladder, they have played some of the top teams and will be looking to gain some much needed points in the next moth or so.

The parents present really enjoyed the match and all were impressed by the boys endeavours and all-round skill.

Trafalgar Boys and Menswear Award was presented to Logan Winter for his great game and two goals.

In other news the team’s Tuesday night training session will be held by guest coach, Mr Peter Boyes, who is one of the senior coaches of Gippsland’s ETP (Emerging Talent Program).  All boys should make the most of Peter’s knowledge and experience.