Creating a Pathway for Girls Football 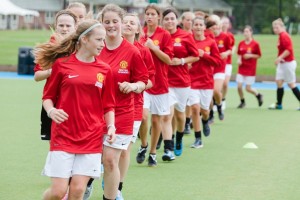 Trafalgar Victory FC, with the support of the Gippsland Soccer League, is creating a pathway for young girls to play football into adulthood.  TVFC, along with 8 other Gippsland clubs, are entering a girls only Under 13 team for season 2105.

All the current research clearly shows that the best way to increase female participation and to develop female footballers is to establish a girls only competition whereby the best female players in the region play against one another.  This model caters for those new to the game as well as for those hoping to play at the highest level via talent identification.

TVFC has recently appointed Ms Shirley Guthrie as team coach and she will be undertaking the FFA Skills Coaching course as soon as next week.  Ms Guthrie is a member of the TVFC Women’s team and has been a captain of the team for the past two seasons.  So the club is now looking for girl players aged 11, 12 & 13 to play in an under 13 “girls only” competition.  Interested players aged 14 are also encouraged to play, as the league may consider an exemption of the age restriction for this season only.

Interested players are encouraged to come to training this Thursday the 19th of March at the Trafalgar Soccer Grounds, commencing at 5:00pm.  Girls are encouraged to bring along a friend and spread the word at school and amongst their friends.  For further information please contact the club via admin@tvfc.com.au or the junior coordinator, Mark Judd, on 0448 032 490 or team coach, Shirley Guthrie on 0411 848 011.