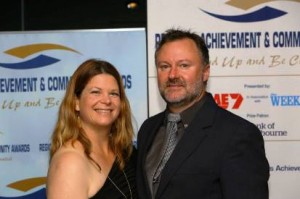 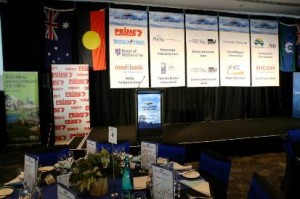 On Friday the 24th October the winners of the Victorian Regional Achievement and Community Awards were announced.  The awards covered nine separate categories and TVFC’s very own Mark Judd was present as a finalist for the Federation Training and Federation University Australia Gippsland Regional Achiever Award.

Finalist and friends were invited to the gala presentation which was held at the Medallion Club at Etihad Stadium, Docklands.  The evening was simply inspiring.  Many of the finalists had dedicated their lives to a community based organisation or project.  Some had made contributions for more than half a century.

Mark was certainly in good company with the other two finalists in his category being Koko the Clown and Alan Stuart.  Koko the Clown has been performing for 15 years and regularly visits the elderly, sick, disabled and disadvantaged.  He was named the Latrobe City Council 2014 Citizen of the Year.  Whilst Alan has been a member of the Mount Taylor Fire Brigade for 55 years. He has organised volunteers in recovery work post bushfires and floods across the Gippsland area.  In 2009 Alan  volunteered in excess of 1700 hours of volunteering over weekends alone.

When the winner of the category was announced, all present were delighted that Alan Stuart’s contribution towards the Gippsland community was recognised.  Whilst Mark didn’t take out the award he was extremely proud to have been named a finalist. “It was an excellent and inspiring evening.  It makes you more aware of what others do in regional Victoria” Mark said.  He went on to say “I am grateful that my partner Shirley nominated me and for the opportunity to meet some amazing people at this gala presentation”.

Also present at the awards were the Trafalgar based “Road Runners” who were nominated for the Medibank Healthy Participation Award.  Whilst the girls didn’t quite reach the finalist stage, all in Trafalgar are aware and appreciative of the group and their generosity towards Andrew’s House.

If you know of any individuals or groups that deserve to be recognised for their contribution to regional Victoria then please consider nominating them for next year’s award.