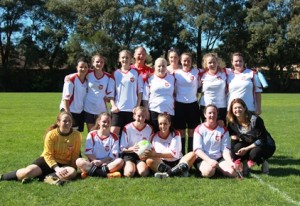 Both the Trafalgar Victory FC Senior Women’s and Reserves teams have earned the right to play in the 2014 GSL South Division Grand Final to be played at Trafalgar on Sunday the 7th of September.

The women’s team had to defeat this year’s league champions Wonthaggi in order to make their way through to their first grand final appearance.  The ladies played a great game with standouts across the park.  None more so than keeper Amanda Hines who denied Wonthaggi and equalling goal in the final seconds of the game.  Midfield/striker Jaiden Jarvis had an amazing game scoring twice in the 3-2 victory.  Defender Kaycee-Jo Tatterson also defended grandly to keep the Wonthaggi strikers covered.  The girls play their hearts out to hold onto a well deserved win.  All at Trafalgar wish the girls the best for the “big game”.

The reserves team, having just won the league title the week before, played out a convincing 4-2 victory over Phillip Island in this week’s semi final.  The predominantly youth based team combined well to set up numerous goal scoring opportunities and it didn’t take long for Rudy Garcia to find the back of the net with a lovely strike from the far left corner of the box. From that moment onwards the team settled and took control of the game.   By the half time break the Victory boys held a commanding 3-0 lead.

Coach Greg Wyatt provided clear and concise instructions to his chargers and instilled a great deal of confidence to all present with his half time address.  Whilst the Island team did score twice to make the game interesting, a final Trafalgar goal late in the match sealed the game with a 4-2 result in favour of the Trafalgar lads.  The class of Dylan Wyatt and Matthew Beasley was an important factor with both players scoring during the match.  The experience also of Mark Edmondson kept the defensive line in check and provided a great deal of stability. 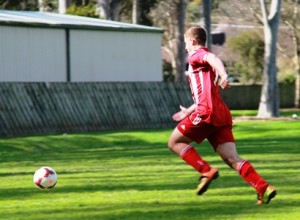 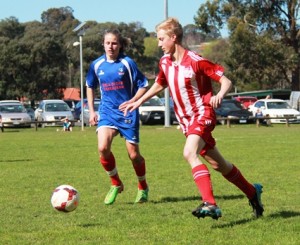 The club wishes both teams the very best for this week’s grand finals.  With a little luck, both teams should be holding a premiership cup aloft.  Go the Victory!

It is worth noting also that a very much undermanned Trafalgar senior men’s team took on Drouin in their semi final. The team, most of which had to back up from a reserves match, gave their all and pushed a very strong Drouin team all the way.  The first half was an extremely close affair with only a superb strike from Drouin eventually breaking the scoreless deadlock.

The midfield played an exceptionally good game.  Dylan and Connor Wyatt were extremely strong on the ball and provided excellent service to team mates.  Brian Farmer also worked extremely hard on his wing making numerous runs throughout the match.  One of the most impressive aspects of the game from a Trafalgar perspective was the emergence of junior aged players such as Rudy Garcia and Cohan Bayles.  Both young lads took up the challenge to their older opponents and performed admirably.

In the second half, Drouin scored to take a 2-0 lead.  However, Matt Beasley took advantage of a free kick earned by Brian Farmer and drove the ball through the Drouin wall to bring the game back to a 2-1 score line. With the match on the line it was Drouin who scored against the trend of play to take the score to an irretrievable 3-1.  Despite a valiant effort, where all Trafalgar players gave their best, Drouin were too strong on the day. 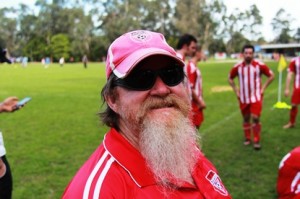