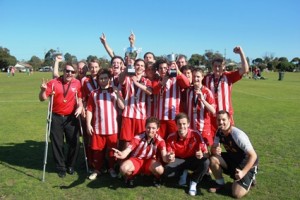 The Trafalgar Victory FC Reserves team today made season 2014 a “Triple Treat” by winning the South Gippsland Cup final, with a resounding 6-0 victory over neighbouring club Mirboo North.  It was a great end to the season for the Trafalgar lads who now add the Cup trophy to the already won League Title and Premiership.

The match was set up early in the game when striker Rudy Garcia scored twice in the first half.  On both occasions the Trafalgar youngster gave away size and weight, yet his strength and determination won out.  His first goal wrong footed the Mirboo North defence when he turned onto his left foot and calmly slotted a goal across the out stretched reach of the goal keeper.  His second resulted from an extremely physical challenge by the goal keeper which sent both players spinnng.  Rudy absorbed the hit, regained his balance first and confidently scored, this time on his right foot.

Other Trafalgar youngsters were up for the challenge.  Cohan Bayles showed a great deal of dash and determination and dominated the left side of the pitch making numerous interceptions and provided great service to the awaiting midfield team mates.  Whilst the ever reliable Alec Edmondson delivered yet another impressive game as team captain, ably supported by his evergreen father Mark who incidentally enjoyed his birthday immensely.

The half time score read 2-0 Trafalgar’s way.  Coach Greg Wyatt once again delivered a positive, focussed and strategic half time address and all players left the huddle clear regarding what needed to be done in the second half. 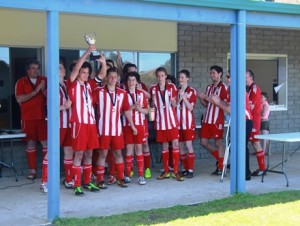 Once the second half commenced the Trafalgar team took complete control of the match and never looked back.  Star mid fielder Matt Beasley converted a free kick under the opposition wall to stretch the lead 3-0 early in the second half and he and Dylan Wyatt controlled the middle of the park, winning a huge amount of contested possession.

Rudy Garcia once again put his body on the line when he again challenged the Mirboo North goal keeper inside the box.  This time Rudy was struck high and a resultant penalty was awarded.  Rudy claims he was well enough to take the penalty.  However, the match referee felt otherwise and called for Rudy to leave the grounds and take a break.  Matt Beasley confidently converted the penalty to make it 4-0 Trafalgar’s way.

There was plenty of support from the loyal Trafalgar members who travelled to Phillip Island for the final.  There was also a considerable amount of humour and advice being offered by Trafalgar players Mick Byrne and Ryan Witty.  Both of whom appeared to enjoy the match immensely.

One of the highlights of the match came from a lovely corner ball kicked by “super boot” Cameron Wyatt that was drilled to his younger brother Aidan.  Aidan, one of the youngest members of the Trafalgar team from off one step absolutely smashed the ball into the net via a superb volley.  One of the best goals you would hope to see.

The Trafalgar team continued to push hard into attack and were rewarded once again when Jacob Haapaksoki converted from inside the box to finish the game off 6-0.  The frustration of the Mirboo North team was evident on the faces of their players and officials on the bench.  There were some rather physical contests during this match and all were very surprised when a huge hit between young Trafalgar defender Jai Irving and a much larger opposition resulted in the Mirboo North striker lying on the pitch for quite some time.

The only hard luck story for the day was when Aidan Mathews busted his ankle during a warm-up run on the sidelines prior to his substitution onto the ground.  Fortunately for Aidan, Campbell Davies mother, a qualified nurse, was present to take care of the injury before Aidan was taken from the venue by ambulance. 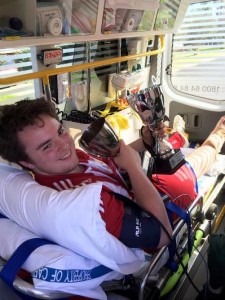 When the final whistle sounded it was a convincing win to the Trafalgar team.  Captain Alec Edmondson once again represented the club excellently at the formal presentation and called the names of his team mates before lifting the South Gippsland Cup aloft.

All at TVFC congratulate Coach Greg Wyatt and his chargers upon an outstanding season.