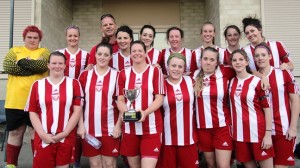 The Trafalgar Victory Senior Women have taken out the 2014 Korumburra Cup with a gritty 2-1 victory in the final over host club Korumburra, courtesy to a mid pitch bomb from midfielder Joelene  Laukens in the dying seconds of extra time.  The match looked destined to go to penalties when Laukens chipped the Korumburra keeper from long range and in doing so sent her team mates into a celebratory frenzy.

It was a well-deserved win to the Trafalgar ladies who have been working extremely hard over the past two months of preseason.  The team has had several personnel changes since the end of last year’s title winning season, including the departure of the star Irish striker Grainne Tiernan.  So the popular South Gippsland tournament proved to be a perfect pre-season hit out for the newly configured team.

The team certainly didn’t have it all their way and indeed were challenged in every match played.  However, to their credit the Trafalgar team kept their cool and quite simply found a way to win when it counted.

The opening qualifying matches against South Coast Stars and Korumburra proved to be very even contests with draws being recorded in both games, 0-0 and 1-1 respectively.  The extremely dry sand based pitches proved very challenging for all teams, especially Trafalgar who have grown accustomed to the delightfully lush turf enjoyed at their home ground.  However they soon adapted to the speed of the grounds and played some impressive football.

The match against South Coast Stars was a closely fought affair and as always, played in the right spirit.  Both teams found it difficult to create scoring opportunities and the narrow crowded pitches were not conducive to a high scoring game.  New keeper Bek Matheson announced her arrival to the competition with an impressive game for Trafalgar.  Whilst the Trafalgar “originals” in Caycee Tatterson and Jaiden Jarvis played their typically strong and highly skill brand of football.  At the end of match one, the final score line was 0-0, a sign of the closeness of the competition.

The second qualifying game was played against Korumburra.  The two teams continued their tradition of close and competitive matches with neither team taking a backwards step.  It was the home team that scored first and threatened to derail Trafalgar’s plans for the day.  However, it was the late introduction of Danelle Wright that made the difference when she converted a golden opportunity created by the brave and courageous play of Jaiden Jarvis.  Jaiden made a desperate dive for the ball in the goal and was taken out by the opposition’s keeper, the dislodged ball gratefully accepted by Danelle.  The goal secured a much needed single point and ensure the team progressed forward to the semi-final stage of the tournament.

Following a well deserved break the girls warmed up and got their game face back on for their semi-final match against Wonthaggi.  Yet again another evenly matched and hard fought game played between two very determined teams.  By this time in the day the team was starting to lose players through both fatigue and injury and the depth of the squad was being well a truly tested.

By the end of full time and despite numerous shots on goal, neither team had scored and the game had been forced into a penalty shootout.  The five shooters were chosen for both teams and both goalies eagerly awaited the contest.   Trafalgar’s goalie Bek read the Wonthaggi strikers perfectly and was able to stop or at least reach all of the shots taken.  A most brilliant effort in a scenario which most certainly favours the shooters rather than keepers.  At the end of the five compulsory penalty shots Trafalgar had scored twice courtesy of Caycee and Jo.  However, despite Bek’s brilliance, Wonthaggi too had scored twice.

The game now reached a “goal for goal” situation and it was Bek once again who made the crucial and brilliant save for the Trafalgar girls.  All that was now needed was for Jaiden Jarvis to step up and convert her shot for the team to advance to the final of the cup.  Without any time to worry, Jaiden walked straight up to the penalty sport, picked her spot and drilled the ball into the back of the net.  Trafalgar was heading to the cup final.

Whilst the main focus for the day had been to play good football and enjoy the experience, suddenly there was a level of expectation upon the Trafalgar girls to “deliver the goods” and all supporters were intrigued how the final between Trafalgar and Korumburra would unfold.

In the first half of the final it was Korumburra who looked to settled quicker and it was the host team who scored first to take a 1-0 lead by the half time break.  Whilst there appeared to be little between the two teams it was noticeable from the sidelines that the first half goal only made the Trafalgar team even more determined.  The girls pushed forward time after time in the second half and threatened to score on numerous occasions.  Eventually through weight of numbers it was Amanda Steen who levelled the game at 1-1.  The pacey striker, along with new recruit Haylee Murphy, worked tirelessly all day in difficult conditions and thoroughly deserved her goal.

Then finally in the last minute of play for the entire day it was Joelene’s moment to shine.  It was fitting that this passionate member of the team, and indeed club, was the one to break the deadlock and deliver victory to Trafalgar in the shadows of the match.  Jo may never kick a better goal in her career and this one was one to cherish at a time when everyone around her appeared simply exhausted.  It was only seconds after her massive chip over the keeper that the whistle blew to signal that the day belonged to Trafalgar.

The girls and Coach Warren Steen gathered on the pitch and celebrated whole heartedly.  The day was most certainly enjoyed by all from Trafalgar.  Coach Steen stated that he was “extremely pleased with the way every player in the squad contributed to a great performance”.  He went on to say he felt that  “the best team won the cup”.

Finally, the team was presented with a cheque for $300.00 and the Korumburra Cup.  Captain Shirley Guthrie thanked the organisers, officials and Korumburra for the match and then praised her team mates and coach for their efforts.  The team enjoyed a great day’s football, then celebrated with a gathering at the Criterion Hotel back in Trafalgar.

The team would like to thank Drew Murphy for being the linesman for all four matches, the loyal supporters who travelled to cheer on the team and the team photographer on the day for capturing some great action shots.

All at TVFC are proud of the girls and are delighted with their success .  We wish them the very best for the season proper.