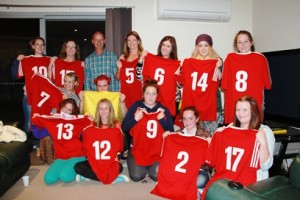 After two plus months of hard pre-season, the TVFC Women’s team gathered for a more relaxed and social event in the form of the 2014 Strip Presentation.

The vast majority of players attended the evening which was generously hosted by team captain Shirley Guthrie. The gathering consisted of a lovely shared meal, with an abundance of food, followed by the more formal aspect of the evening, the official strip presentation.

All the characteristics of a healthy and friendly team were on display for all to see.  Plenty of smiles, many laughs and a genuine sense of friendship.  This team is indeed galvanised and ready for business come the first game of the season.

With eighteen players currently committed to the team there is a great feeling of optimism and considerable excitement about the teams prospect for season 2014.  Coach Warren Steen has assembled a fine group of ladies who are looking to not only replicate the success of last season, but to building upon it.

As with all seasons, some players move on for a variety of reasons.  However, last year’s league champions have managed to recruit an impressive collection of new players along with the promotion of several junior aged girls.

The evening was indeed a huge success and all is now in readiness for the girls defence of their 2013 title.