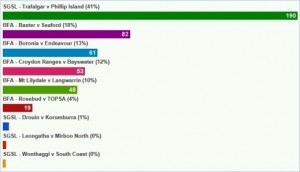 Following an extremely strong social media response from Trafalgar Victory FC members, friends and players, this week’s Trafalgar Victory V Phillip Island opening round clash has been selected as the “Football Chaos” match of the round.

Football Chaos runs a website featuring the best of Victorian state level/metropolitan football. Each week they select a match to feature, including video footage and match commentary.  Traditionally their services are focussed upon metropolitan football.  However, for this week Football Chaos offered to cover either a South Gippsland Soccer match or a Bayside match.  So a Facebook vote was established to determine which match would be covered.

At 9:00am on Saturday the 25th April, the Trafalgar V Phillip Island match was ranked the 3rd most popular match with approximately 30 votes, way behind the Baxter V Seaford Bayside match who had received 70 votes at the same time.  After a massive social media blitz across the club, the TVFC V Phillip Island match easily won the vote with 190 votes, 118 ahead of the second choice match.  As a result Football Chaos will be visiting Trafalgar this Sunday (27th April) and the matches from the day will be published on their website.

Thanks to the numerous TVFC supporters and friends who voted for our game.  It is a great result and will go a long way to promote our club and facilities to the wider Victorian football community.  TVFC member are warmly invited to come and witness the opening matches of the season for Men’s, Women’s and Youth teams.