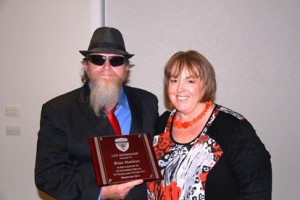 Until the 2014 Senior Presentation, Trafalgar Victory FC had only two life members in Craig Sobott and Angelo Carpinteri. Both men served our club for an extended period of time and each is responsible for the recruitment of dozens of players.  Angelo has done just about every role there is at a club, whilst Craig has been a long term coach and advocate for women’s football and indeed the driving force behind the introduction of a women’s team at Trafalgar Victory FC.

However at this year’s senior presentation the TVFC Committee inducted a third life-member to Trafalgar Victory FC, Mr Brian Mathews.

Brian has been involved with the Trafalgar Soccer Club for the past 12 years.  Over this time he has made a significant contribution.  It all started back in 2001 at the first game of the season when the ref wouldn’t start the game until the lines were done.  By the day’s end Brian had got the keys from Marcus Barker and started doing the lines for the club, and he has continued to do so until only recently. (Peta often comments that only after Brian retired did we purchase a new line marker) 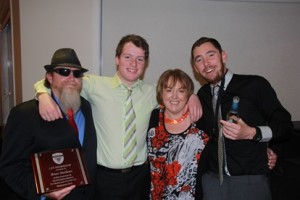 Unlike today where the grounds are mowed by the Trafalgar Parks and Gardens team, Brian had to mow the pitch on the high school’s ride-on mower. It would take him the whole day to mow the ground and then mark the lines.  At the beginning of each new season Brian would have to find each corner post, and mark out a new field, this would take a full day. It was very rare that Brian made a mistake with the marking (although one season the centre line wasn’t quite right).  When TVFC moved to the new grounds it took him a couple days to mark the new pitches with the assistance of others such as Warren.  Brian has also marked out numerous “5-A-Side” pitches, all of which were “centimetre perfect”.

In addition to his groundsman duties, Brian would clean out the change rooms after every training session and game.  Often after all had left the venue and without even as much as a thank you.  I’m sure many of the boys simply thought there was a cleaning fairy that magically appeared after every training session and on game days. Once at the new grounds, Brian also cleaned out the shipping container on a weekly basis, again without fuss or acknowledgement.

Back at the High School ground, BBSC for many years refused to drop off and pick up soccer bins and it was Brian who regularly carried the filled rubbish bins to the larger skip at the high school some 100’s of meters away. Brian also did his fair share as team coach & manager: 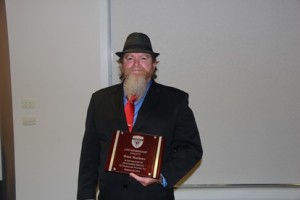 Vice president for a term

(President for 1 week when Andy Ross quit, before returning to the position)

When the men’s team needed players, Brian was also willing to “kit up” and take to the pitch.

(Brian’s famous quote was “10 mins per half per game”.  It didn’t quite work out that way with Brian playing the entire season) 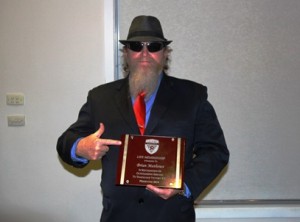 Brian has always made himself available for the club.  He has attended countless working bees and often simply fixed items on the spot with minimum fuss.  Brian has helped pick trophies, assisted with presentations and the canteen, as well as the running the lines.  Even this season, Brian assisted in the picking and collection of trophies.  He helped clean and set up the new canteen and ref’s room.

Indeed Brian has dedicated himself to Trafalgar Victory FC over many years and it is not by chance that he was named the Senior Club Person of the Year on three occasions.  So from all at TVFC we wish to thank Brian, for all he has done for the club as well as the parties thrown in his shed.  We the current TVFC members say thank you, well done and congratulations.  Your contribution has been significant and very much appreciated.