TVFC Under 12s Win in Sale 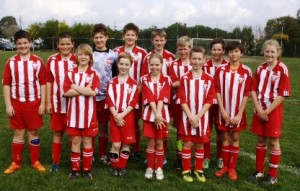 The Trafalgar Victory Under 12s recently played Sale Green and Sale White over two consecutive rounds, with matches being played at Trafalgar and Sale respectively.

The first of the matches was against the 4th placed Sale Green.  Back in round 1 Trafalgar was convincingly defeated 8-2 by this particular team.  Coach Mark was very keen to measure the improvement of his team with this return match.

Despite a much improved backline, ably lead by Nic Tammes, Sale was able to score three times in the first half.  One goal was a rather unfortunate penalty when both a Sale attacker and Trafalgar defender tangled legs and fell inside the box.

The highlight of the first half, from a Trafalgar perspective, was the lovely run and finish by Kate Wheildon.  Kate has played a variety of positions throughout the season and works very hard week in week out.  It was great to witness her joy and that of the crowd when the she kicked her first goal for the season. A great moment for all red and white supporters.  Unfortunately it was the only game of the season that her mother Lisa missed for the year to date.  Take it from those present Lisa, it was a great goal.

Despite some structural changes in the second half, the Sale team once again scored three more goals. Once again Trafalgar were unlucky to concede a goal following a hand ball call.  Sale ran out winners, the score line being 6-1.  However, the Trafalgar team most certainly have improved in general play, team structure and defence.

The second match was played against Sale White at Sale.  This time Trafalgar were taking on the younger of the two Sale teams, who were positioned 2nd bottom on the ladder. However, having lost to East Gippsland Blue only weeks ago, who were also placed towards the bottom of the ladder, the Trafalgar team weren’t taking this match lightly.

Despite the best intentions and obvious commitment for the Trafalgar team, the first half was really frustrating for supporters and players alike.  The Victory players had the vast majority of possession, yet couldn’t find the back of the net.  The inability to find space on the smaller second Sale pitch was proving a real challenge for the Trafalgar kids.  The half time score was 0-0.

The players regrouped at half time and the clear instruction from their coach was to move the ball quicker and find players in space.  The team was instructed to use Ben Turra as the link player and to their credit they followed instructions well in the second half.

Ben switched play over and over again finding both Haylea and Jackson on the left wing who in turn generated many scoring opportunities.  Rhys Thege had the ball on a string and looked extremely dangerous around goals.  It was a pass from Rhys that set Michael Judd up for the first goal of the day.  Michael to his credit kept his cool one on one with the Sale goalkeeper to finish nicely.

As is often the case, once the first goal was scored, the pressure released and further scoring opportunities presented themselves.  Flynn George started to get on top of his opponent in the game and combined very nicely with Jacob Holmes to also bring the ball deep into attack.  In the event that the ball did break through the dominant Trafalgar midfield, defenders Tristan, Connor and Kate cleared the region most effectively.

Michael scored a further two times to claim a hat-trick, his final goal was courtesy of a deflection off a Sale defender.  Perhaps the most miraculous goal of the match came from the boot of Jackson.  After a strong run up the left wing, Jacko turned to fire a “pass” to the penalty spot.  His kick wasn’t quite on target but somehow managed to go straight at the Sale goalie, who was caught completely off guard.  When the ball went past the keeper and across the goal line, all were completely stunned.  None more than the coach who was at the time yelling to Jacko to “pass to the top of the box”.  A great goal from Jackson who obviously knew what he was doing all along.

It was great to see the team respond to half time suggestions and make changes in their game style.  Yet another development stage for this ever improving team.  Final score was a win the Trafalgar 4-0.