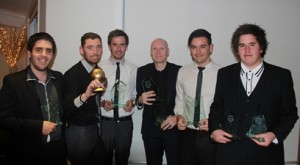 The 2014 TVFC Senior Presentation was held at The Black Tie in Warragul on Saturday the 27th of September.  The evening was formal dress and consisted of numerous individual awards, several speeches and a lovely buffet meal.  The event was well attended, superbly organised by Dylan Wyatt, Caycee Tatterson and team and enjoyed by all in attendance.

Both senior coaches delivered emotion filled addresses, leaving those present in no doubt of their love for the game.  For the first time both club life members were in attendance.  Mr Craig Sobott and Mr Angelo Carpinteri were present to witness Brian Mathews become only the third club life member.  Shirley Guthrie was deservedly announced the Luke Barker Memorial Club Person of the Year for her outstanding management of the new pavilion project.

Other award winners on the night were as follows: