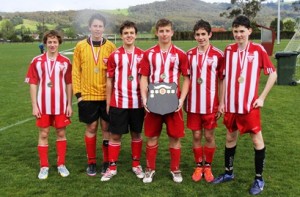 Team entries are now being accepted for the 2014 TVFC “5-A-Side” Tournament.  The event, which is now entering its seventh year, continues to grow in popularity and has become for many a “must do” for the month of October.

This year’s tournament will take place on Sunday the 12th of October and all team entries and team fees must be received by Trafalgar Victory FC by no later than Wednesday the 8th of October.

As always there will be three separate division; Open Men’s, Open Women’s and Intermediates (Under 16s). Each division will consist of eight team  spread across two pools.  Each team can have a minimum of 5 players and a maximum of 7 players.  Enter your team today to avoid missing out.

Questions regarding this year’s tournament can be directed to the club via email admin@tvfc.com.au or to the tournament organiser Mark Judd on 0448 032 490.