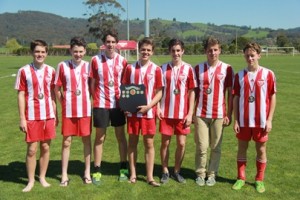 The 2014 TVFC “5-A-Side” Tournament took place on Sunday the 12th of October at the Trafalgar soccer grounds. With the weather perfect and the ground looking superb, the day promised a proverbial feast of football.

This year’s tournament consisted of a record ten team entries in the ever popular men’s division.  However, entries for both the Intermediate and Women’s divisions were down a little on past years.

By the end of the round robin phase of the tournament the Intermediate and Women’s finalist had been chosen, as had the semi-finalist in the Men’s division.  Trafalgar 16s played Warragul United in the intermediate division final, whilst Power Buff Girls played Hoinetzeinewem in the Women’s division final.   The Men’s semi-finals were also decided with last year’s champions Scotland 3 who defeated Moe Young Boys 1 and Trafalgar’s very own Farmtastic defeated Moe United SC 9-7, following an exciting penalty shoot-out.

After several hours of fast, furious and exhausting sun drenched football the finals were played.  The results of which were as follows:

An excellent day’s football was had by all in attendance.  The tournament was excellently run by the TVFC club and its hard working volunteers.  To top it off all the TVFC teams made it through to the grand finals of each division, with the club taking out two of the three divisions.

Special thanks to Templar, Stephen, Matthew, Mark, Shirley and Dylan for setting up the grounds on Saturday’s working bee.  Also on game day to Lance for time keeping, Shirley for a huge day in the canteen, Peta for preparations and medallions and the Under 16 parents (led by Phil) for collecting and packing all the goals away.  It was indeed a huge day for the club.