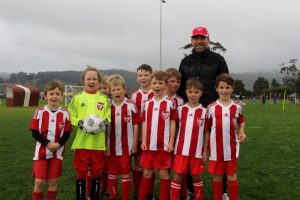 A short trip to Newborough for the next round for the TVFC under 8s. Our biggest problem for todays game was going to be the number of players, with eleven warming up we could have fielded a full pitch team if needed, unfortunately only seven players can be on the field and with everybody raring to go it was going to be hard to give everybody enough game time, saying that it is great to see so many enthusiastic players who did not complain and were happy to take their turn on the sidelines cheering the team on.  The game got off to a fast start with both sides having a few chances but no goals scored in the first ten minutes, TVFC started to take control and Cohen scored a couple of quick goals and Onyx adding to the score line with a neat goal. Stella, Jack and Quinn were getting stuck in with some good passing and tackling. Anton was solid at the back with support from Arlo.  Harvey and Rylee were controlling the middle with Tyler popping up everywhere covering every inch of the pitch.

TVFC went into half time without conceding a goal but things were about to change in the second half, another quick goal from Cohen and it looked like it would be more of the same, with all the changes being made by TVFC to give everybody game time, we lost our concentration and Newborough started to get on top, we conceded goal after goal and before we knew it Newborough were up 5-4, Felicity was in goal again and even though she was doing a great job, could not keep out the goals from Newborough’s striker “Mason”, with 5 minutes remaining Onyx got his second for the day and with less than a minute to go, TVFC went ahead, we held out for the final few seconds, it was a exciting game and a hard fought win for TVFC. Great effort from Onyx today who won the Jump & Climb Award.

Report by Peter Court, U8 Coach.