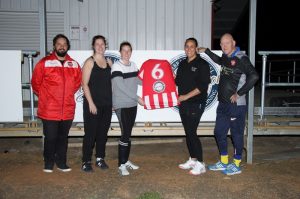 Trafalgar Victory FC were delighted to have Renee Kemp, operator of the Yarragon Hotel, drop in on a training night last week and take a look at the playing group up close and first hand.  Renee and Chris have for the first time this year become a “Victory Club” Sponsor.

One of the many benefits of being a “Victory Club” Sponsor is having your logo on one of the teams playing strips and having a large sign proudly mounted under the veharnda of the clubrooms looking over the pitches at Trafalgar.

Renee was delighted with the Yarragon Hotel logo being proudly displayed on the Senior Women’s kit and upon the clubroom signage, both of which are seen in the picture attached to this report.

The club is extremely grateful to all its valued sponsors.  All TVFC member are strongly encouraged to support those businesses who support their club.  In appreciation of the Yarragon Hotel’s sponsorship, members of the TVFC senior playing group and supporters enjoyed an evening of friendship, drinks and dining at the Yarragon Hotel following their matches against Churchill last Sunday.

Thanks once again to the Yarragon Hotel for being a 2018 “Victory Club” Sponsor.