LVSL called for all clubs to provide Mascots (22 female players aged 8-11 years) to accompany W-League players onto the pitch. Two U10s Girls from TVFC volunteered to be Mascots, MacKenzie Rankin and Ava Gray. The girls enjoyed the experience. 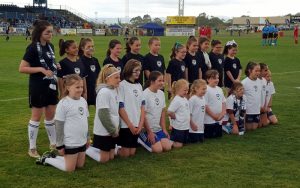 All 22 mascots from various LVSL clubs. TVFC’s Ava and MacKenzie are 3rd and 4th from LHS in the back row.

Mascots all lined up with the Melbourne Victory or Adelaide United W-League player they accompanied onto the pitch prior to the pre-season friendly commencing. Ava and MacKenzie are 6th and 7th from the LHS in the front row.

LVSL also called for all clubs to provide a team of 5 MiniRoos players to play small sided soccer during half time of the W-League match. TVFC U10 players of Paddy Guthrie Aitken, Zane Saltness, Logan Fascio, Ýelan Mateus and Braedan Van de Beek participated in a game against Traralgon U10 girls team. The game went for 15 minutes and all players had an fantastic time. 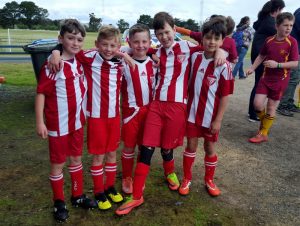 Logan, Ýelan, Zane, Paddy and Braedan before the game 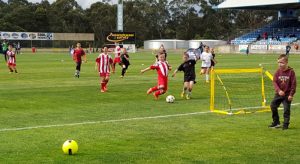 TVFC also provided a BBQ just outside the main pitch from 10:30am-5:00pm. Thank-you to the volunteers of Lachie Wyatt, Shirley Guthrie, Aiden Mathews, Tanya and Adrien Makins, Katrina and Chloe Allison, for cooking and serving sausages and burgers throughout the day.