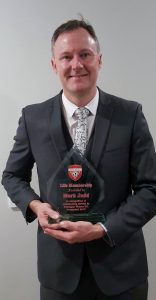 The following is a copy of the speech made by TVFC President Lachlan Wyatt at the recently held 2017 Senior Presentation:

Its my great honour to be able to present this next award. Our club has developed greatly over the years. And for our club to develop we rely on the hard work and dedication of many volunteers.

Mark Judd is the most outstanding example of dedication, passion and commitment to a club I have had the pleasure of witnessing.

Mark joined Trafalgar Vikings in 2003 as a player. In his first year we was awarded the runner up best and fairest award. He continued to play for a further 4 seasons winning the Most determined award in 2005. In 2007 Mark began coaching as a SSF/miniroos coach. The next year Mark would become the clubs vice president in a year which saw the introduction of our first womens team and 5 a side tournament while still coaching his SSF team. In 2009 Mark became President of TVFC. He maintained his coaching while in this role which he held until the end of the 2013 season. In this time the club was awarded the Outstanding club award in the Vic community sports and recreation awards in 2010. In 2012 our new Soccer pitches were opened.

Mark was also awarded the Luke Barker Memorial Trophy for Club person of the year in 2010 and 2011 for his enormous efforts in establishing the club at the new grounds and the huge work associated with the transition. From 2014 Mark served as a general committee member and coach for 2 seasons until in 2016 he took on the role of Junior Co-ordinator. This season Mark coupled this role with the Vice President role in a year where his under 16’s team made the preliminary finals and he received a nomination for the club person of the year award.

Mark has also spent countless hours performing other roles.  registrar, delegate, media manager and numerous other jobs. He has managed our 5 a side day every year it has run, been the club registrar, junior delegate, media manager and he has organised our Christmas tree fundraiser to great success. Mark is one of the first people to out their hand up to assist in working bees, marking fields and has been the clubs chief grant writer.

One of Marks proudest achievements is his runner up Optus small sided football national coach of the year award and rightly so, to be recognised on a national level is no small feat. He also was recognised at the Trafalgar citizen of the year in 2016 for his contributions to our club. After hearing this resume im sure you will all agree that we owe an enormous gratitude to Mark for all of his work. He is part of the very foundation of our club and without Mark’s contribution to our club there is a very strong chance our club wouldn’t have lasted as long as it has so far.