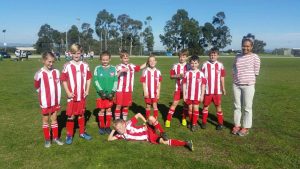 Trafalgar under 10s Miniroos team played against a very good Traralgon side. Both teams were evenly matched and both our goal keepers Aaron and Charlie, did some fantastic saves. For the game, we had to think about spreading out, holding our positions and calling for the ball. The defence line had to work on keeping an eye on their player. Most players had at least one good first touch during the game.
It was good to have encouragement from the sidelines from our parents and guardians.