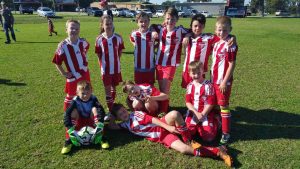 Another great game where the sun was not the only one shining. Traf played really very well, and much more importantly than the victory (6-0) against Olympians, Traf demonstrated an excellent team spirit, searching for and passing the ball to their mates, knowing their role and position, using more and more the techniques learned during the trainings, and always supporting each other. It was also a pleasure seeing them each game more and more confident, and, very importantly, having fun together.

This weekend the 2 prizes were awarded for Mackenzie and Zane.  It must have been a very difficult choice for the coach given that all played so well.

Some of my highlights:

– Mackenzie: she was always present in the game; even the 2 times she got injured, she managed to quickly return support her mates, and was a big contributor the overall team performance

– Zane: excellent player in all roles, he has the technique and he is a strong team player, always passing the ball at the right time, as seeing and taking the opportunities to score a goal when appropriate. I am always impressed by his passes long and precise

– Bailey: scored the first goal, and some more afterwards. He also made some passes that allowed others to score. Well done Bailey

– Paddy: improving in his defence and putting pressure on the other team; Paddy intercepted a few potentially dangerous balls. Also to highlight the moment where is tried to comfort Mackenzie during her second injury. That’s the spirit Paddy

– Mitchell: entered into the team recently (this was his second game), he is already perfectly fitting in. Very confident and with great technique.

– Braeden: he scores at least one goal every game he plays, I was particularly impressed when he tried this time playing in defence; very good balls intercepted and long passes for the mid field. Braeden is definitely very versatile and can excel in any position.

– Yelan: played as goal keeper, he remained very focused throughout the whole game despite Traf defenders did not “gave” him many opportunities to play. He defended very well during the few times Olympians attacked, and intelligently put the ball back to his mates at the wings

– Ava: last but not the least, Ava is also improving a lot, and getting more and more confident. I particularly appreciated the very nice “dance” after she scored her first goal in the season (and for sure not the last).

It was awesome seeing this game, and looking forward for seeing the next one. Congrats to the team players and coach!!
Match report by Miguel Mateus