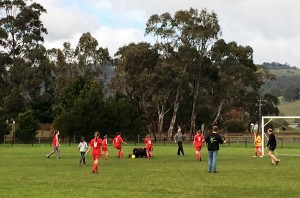 This week with the Trafalgar Under 13 girls team having a bye the team decided to challenge the parents to a ” friendly” game  at Trafalgar. With numerous parents unable to get their hair wet it was lucky that the forecast showers had blown through whilst the girls had their pre game training session.

Plenty of trash talk had been suffered by a number of the girls and it was time to see if the parents could walk the walk. The game started at a furious pace with the parents using brute force and the girls playing smarter and utilising their superior foot skills. Goal keeper Gabby was equal to a number of long range cracking shots tipping one effort over the bar in spectacular fashion. Mackenzie, Nyah, Tia all jockeyed their opponents brilliantly to shut down numerous attacks and with Livvie running rings around ring in senior womens team member Emma the girls had the game under control.

Against  the run of play the parents team managed to fluke the first goal of the game. This only spurred the girls to greater efforts and soon they had the parents on the back foot again. With Haylea , Skye and Amber running amok in the midfield the parents could only look on in awe. Some how the parents again managed to find the back of the net with a very lucky shot. Haylea then took it upon herself to even the game up with a goal just before half time.

The oranges could not come quick enough for the wilting parents as the pressure was ramped up. Under 10 player and gun coach of the parents team Ava implored her troops to keep going with an inspiring half time address whilst over in the girls camp it was a very calm and methodical strategy put in place. Naturally the girls stuck to the game plan and came up with their second goal to even the scores.

The parents rose to the occasion and with some quick breaks down the wings thought they were in with a chance. Each attack was thwarted and the ball put back into the girls forward line. With time running out and the parents becoming more desperate numerous tackles were mistimed.  Mackenzie, even though hacked from behind, still managed to shoot and her shot from the halfway line evaded all the defenders and confused the goalie to put the girls into the lead. The arrival of the pizzas for lunch distracted the backline momentarily and the parents team took full advantage of the slip up to score in the last seconds of the game. Final score of 3:3 did not give a true indication of the domination the girls had over the opposition.

A big thankyou to everyone who entered into the spirit of the day by playing, coaching, supporting, taking photos, organising  and collecting pizzas.