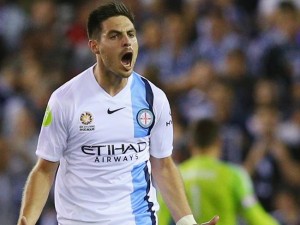 A Bruno Fornaroli hat trick for Melbourne City FC ensured that Trafalgar Victory FC gained maximum financial return from this week’s Hyundai’s “Goals for Grassroots” match.  The Uruguayan striker, has already scored more goals in an A-League regular season than any player before him with five rounds still remaining in this year’s regular season.

Trafalgar Victory FC were selected as this week’s A-League Goals for Grassroots club.  As a result Hyundai, the major sponsor of the A League, will donate $1,000 for being the chosen club, PLUS $1,000 for each of Fornaroli’s three goals.  That’s a whopping $4000 for TVFC Junior/Miniroos program.  Those who attended the match certainly “got their money’s worth” and celebrated each and every goal.  The club committee now has the enjoyable task of deciding how to best invest this money to support the development of our youngest members.