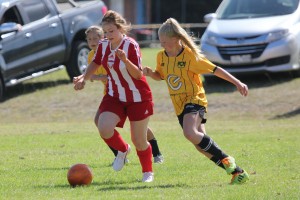 Following many years of discussion, planning and proposing, Trafalgar Victory FC finally made the move into the Gippsland Soccer League as a fully-fledged member of the senior competition. The club now fields teams in all three men’s divisions of competition, in seniors, reserves and 2nd division, as well as a team in the senior women’s competition. This is the first time in the club’s twenty year history that Trafalgar has fielded a Senior Men’s team.

This historic step allows children who play at the club a pathway into the highest Gippsland based soccer competition available, whether they be male or female. Trafalgar will now play against clubs based in Moe, Newborough, Morwell, Tyers, Churchill, Traralgon, Sale and Bairnsdale. The season will indeed be filled with challenges, yet it provides considerable opportunity for growth for players and as a community focussed sporting club.

The first round of senior matches was a baptism of fire, as such, with the men’s teams playing last year’s second place team, Morwell Falcons 2000. All three Trafalgar teams lost out on the day. However, the senior men in particular provided a spirited performance, earning the respect of their opposition. The team went down 6-0, yet played over half the match a man down, following a red card. Two of the goals conceded were quite preventable, whilst a third was scored from a clear offside position. Coach Mark Wood was quite upbeat about the performance and was happy with the style of game played by his team. With several additional players returning to the team, next week’s match against Monash SC should be quite a competitive affair.

Meanwhile the TVFC senior women took on a youthful and skilful Monash team at Monash for their first round match. The Trafalgar girls were extremely competitive in the first half of the match and scored early in the match.  However, the experience of Monash’s senior players proved too much for the inexperienced Trafalgar line up who conceded several goals in the second half as player fatigue took its toll.  On a pleasing note the girls do have very strong player numbers this season and via the direction of coach Lachlan Wyatt will undoubtedly improve over the duration of the season. 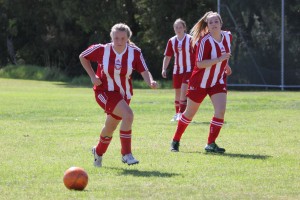