The quality of the football was only surpassed by the quality of weather at the 2015 Trafalgar Victory FC 5-A-Side Tournament. Under beautiful blue skies 19 teams participated in this year’s tournament and the football was simply amazing. With a record 14 teams entered in the Open Men’s division there were in excess of 130 players taking the pitch at this year’s event, with many more supporting on the sidelines.

For the first time the club was able to use its new sets of 5m x 2m Samba goals and upon the lush Trafalgar field it looked quite a sight. The goals were purchased via grants from both the state government and Baw Baw Shire.  Such was the interest in the tournament that several highway travellers dropped into the grounds just to take a look at the matches being played.

The first stage of the tournament was based upon a round robin group stage. Thereby ensuring that all teams entered at least got three matches minimum on the day. At the conclusion of the group stage, teams were seeded and a final series commenced for the top half ranked teams and bottom ranked teams from each group.

The competition was fierce and the standard of play even better than last year’s tournament. There were the traditional faces from teams like Scotland, Gippy Boys, Moe United and Trafalgar. However, the addition of new comers such as Mighty Ducks, Yarragon FC and 3840 certainly added some interest and life to the tournament.

At the end of the day the Open Men’s A Grade final was played between last year’s winners Scotland and local identities Moe United FC. Moe United pushed the visitors all the way, only to have Scotland win the title right at the end of the match 3-2 to record yet another title at Trafalgar. 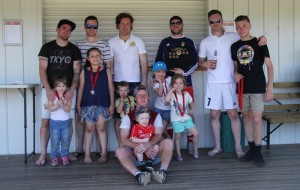 In the Open Men’s B Grade final it was long-time supporters of the event Gippy Boys who eventually defeated the boys from Tyers 8-7 courtesy of a penalty shootout following a drawn match at the end of full time and extra time. Gippy Boys goal keeper, Matt Royal, proving the difference between the two teams. 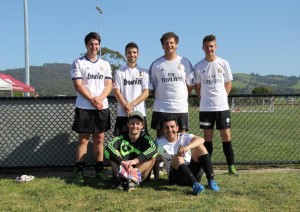 The Intermediate final was a tight affair, played between Fortuna 1 and team Tenderise. Fortuna 1 had only just defeated their younger rivals, Fortuna 2, 3-2 in the semi-finals. Whilst Tenderise had marched into the final following a convincing 6-1 win over the Slippery Eels in their semi-final encounter. Fortuna 1 had to fight all the way to overcome the highly fancied ETP representative team. It was a great game to watch with some real quality play on display. The final result was a win to Fortuna 1, 3-2 against Tenderise. 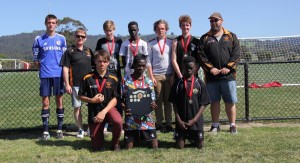 The day was indeed heralded a great success by participants and TVFC club officials alike. It is was a most enjoyable event, showcasing some amazing local soccer talent. All participants were more than happy to put on their boots for this annual post season tournament.

Trafalgar Victory FC would like to thank all the teams that participated in this year’s tournament. The club is also very appreciative of its numerous volunteers who worked all weekend long to make the event such a success. It was great to hear TVFC families making comments such as “This is our club and we want to support it”. Organisers were delighted to see so many TVFC members either contribute to the event or simply come and support on the day. The club is already planning to make the 2016 5-A-Side Tournament even bigger and better.