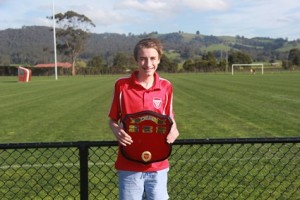 Drew Murphy has been announced as the TVFC Junior Club Person for the 2014 season. In 2012, the TVFC Committee introduced the “Junior Club Person Award” to both recognise and encourage a junior aged member of our club who makes a significant contribution towards the betterment of our club.

This award has been named in honour of Mr Angelo Carpinterri, a life member of the club.  Angelo has done everything one can do at a sports club.  He played for many years, was a committee member for numerous years, he still referees today when called upon.  Angelo has seen it all through thick and thin and has been a perennial sponsor of the club over its 18 season.  He is a well-respected and valued member of our club and the wider soccer Community.

Drew has been a linesman in many senior games and the Korumburra Cup.  He has completed his Grassroots coaching Certificate and has assisted in under 11 s training with the intention of one day coaching junior soccer.  Drew has refereed many under 11 games on a Saturday morning.  He also generally helps out with setting up before a game.”  Drew is also the youngest member of the Men’s Reserves team.

All at TVFC congratulate Drew upon this award.  He is indeed a most worthy recipient.